Comments about last Wednesday's article, "We Want Tech: When You Can't Stitch":

Maybe I am misunderstanding what you see as a problem here, but ...

Both versions of your stitched map have an inverted keystone shape, suggesting that the lower part of the map was photographed at camera level and you tilted the camera up to get the upper part. Tilting or panning works if you are stitching a landscape, but to get a square document to come out square in the stitching you have to move the camera to keep it pointing directly at the center of the part of the document you are currently photographing.

You are correct that the bottom half of the Halifax map was shot straight on and then the camera, mounted on a tripod, was tilted upward for the upper part.

But you are only partially correct assuming that the stitched result won't be square if the individual photographs are not square. Look back at “We Want Tech: Stitching Folio Size Documents.” The photographs of the FHL wall mural were all shot from a tripod at a fixed point. Here is one: 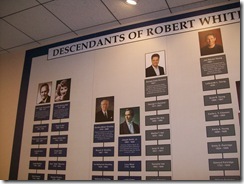 One of the photographs

I used three levels of tilting and five positions of panning. The stitching program corrected the distortion and created a square result: 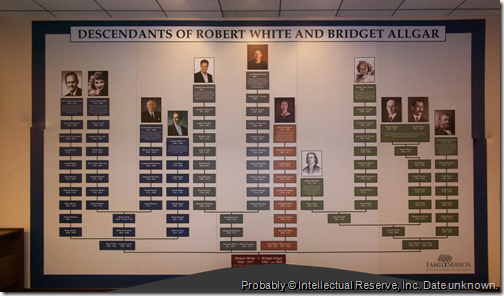 Distortion is corrected in the stitched image

Stitching photos has been around for a long time and is hugely represented by many sophisticated software programs and even camera manufacturer's programs like Canon's software. There are some extensive sites online discussing the panoramic photo process. It looks like I will have to write something about this.

I am so glad you’ve taken notice. Thank you for your article, “A Stitch in Time, in Genealogy, Saves Nine (Photographs).” David Rencher, myself, and everyone else looking for a solution are grateful. If you or anyone else want to take a stab at stitching David’s map example, I’ve posted the nine photographs on Flickr at

They are named “Drogheda Map Photo#”.