We Want Tech: When You Can’t Stitch 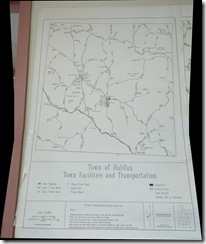 I decided to try a map of my own.

To make the test as realistic as possible, I flew to the opposite side of the country, drove several hours to a small town in New England and took pictures of a wall-mounted map tucked away behind the coffee machine in the town hall (several rooms attached to the school house). I took three overlapping photographs of the map, drove back to the airport, flew home, and fed the photographs into Image Composite Editor.

It successfully stitched them, but distorted the map something fierce. (See the image to the right.) While passable for general purposes, it might be difficult to use for plotting metes and bounds. Click on the image to magnify it a bit. The full size image is 29 megapixels (4950 x 5879).

The Family History Library wall mural may have been much bigger, but it may have been easier to stitch because it is all orthogonal lines and boxes.

If you can’t stitch your map photographs, are there alternatives? You bet. Microsoft Photosynth is a photograph viewer that makes it easy to move from photograph to photograph based on their overlap. It’s a nice alternative to stitching. You zoom into any image as close as you need. You pan around the image. When you reach an edge, a ghost of the next image appears. Click on the ghost to view it—without distortion.

Below is an example Photosynth of Rencher’s map. I zoomed out far enough to see the ghosts surrounding the central photograph. This view reveals a problem that may have caused the failure in Image Composite Editor. 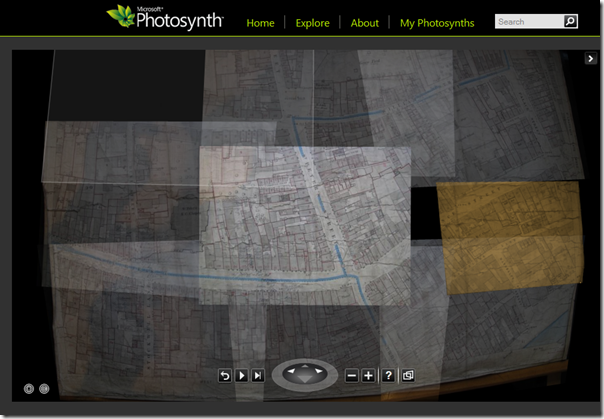 Notice the photograph that I colored yellow. It was shot closer to the map (or with greater zoom). It doesn’t overlap any other photo besides the one below it. It leaves a hole in the map. Further complicating things, I was working with low resolution copies of Rencher’s photographs. But even with these problems, Photosynth successfully positioned all nine images. Click the above image to see Rencher’s map of Drogheda, Ireland. 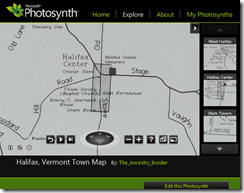 I redid my test map in Photosynth. Click on the image to the right to see the result. Compare it with the stitched result from Image Composite Editor at the top of this article. Do you prefer working with a deformed stitched image? Or with a non-stitched, non-deformed Photosynth?

As we’ve seen, success depends in part on how carefully you take the photographs. Computers are stupid and easily confused. Try to keep things simple: