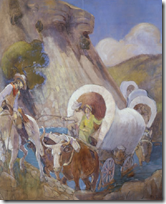 The Mormon Overland Travel, 1847-1868, [database] is the most complete listing of individuals and companies in which Mormon pioneer emigrants traveled west to Utah from 1847 through 1868. It is an incomplete listing, as rosters have not been found for all companies. It also identifies sources to learn more about the experiences of each company.

The database is the work of Melvin L. Bashore, senior librarian at the Church History Library and Archives. He received a Distinguished Service Award from the Oregon-California Trails Association for this extraordinary database.

When published on the Internet, the database’s website invited contributions. This raised questions about the possible inclusion of non-primary information, diluting the quality of the database. When I got the chance to contribute, I jumped upon it as an opportunity to learn how contributions were handled.

I had come across a document witnessed by Harmon Cutler that stated that the George Wilkins family travelled in his company of 1852. It named father, mother, and two children and it specified the parents’ death date.

I submitted a full transcript of the document along with a complete source citation. I shortly received a response from a volunteer missionary that greatly added to my confidence in the database. It stated that because of their interest in accuracy they only accept

what historians call “primary sources,” (period documents such as a pioneer diary, the company journal, an autobiography or a letter written by one of the pioneers, the individual’s obituary, or a source published during the pioneers lifetime, etc.) Such documents must be explicitly clear that an individual was in a specific company or that they traveled at a particular time.

The missionary stated that my source met the criteria and he had added the information to the database. I was happy to see these safeguards to protect the quality of the database.

After setting such high expectations, I was surprised and disappointed with what I found when I searched for George Wilkins and family. Additional information had been added along with a one-word citation: “FamilySearch.” Was the source one of FamilySearch’s high-quality historical records? Or was it one of the error-ridden, source-less online trees?

And the database has no mechanism to associate citations with particular pieces of information. It is impossible to tell which information came from which source.

Further, the FHL film number had been stripped from my citation, leaving users no apparent method of accessing the source save to personally visit the Church History Library and Archive in Salt Lake City. My transcript had likewise been discarded.

In the end I found the rumors to be true. I discovered that “The Mormon Overland Travel, 1847-1868” database does indeed suffer from the use of second-hand information. However, and to my surprise, the sources were not those supplied by contributors but those supplied by its own staff.