Over the last year or so I have noticed a number of changes in a few of the Family Search databases.  The largest to date has been in the “Iowa, Marriages, 1809-1992” database:

The following is the information that I found when the collection came on-line:

[Dear readers, Jack had a bunch of text here showing what he originally found. In addition to the information in the “Iowa, County Marriages, 1838-1934 record in the second image, below, the record also had

When I recently returned to check additional marriages from the 1809-1992 collection, I noticed some changes. Digging showed that [groom’s birth date and age were missing]. This is what I found: 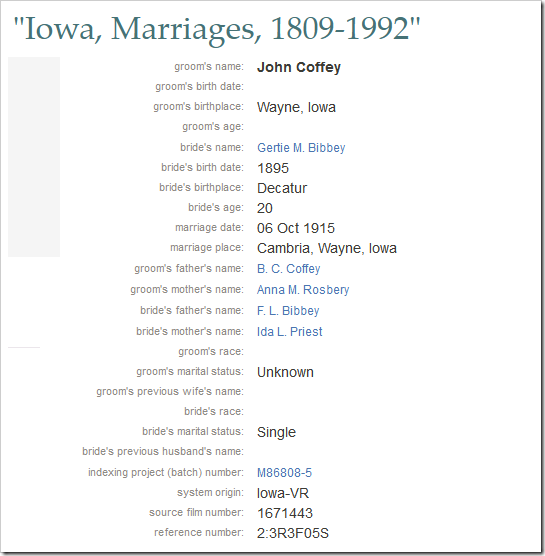 I understand – at least I believe I do – that the batch numbers and the system origin numbers represent two different original source records. What I do not understand is where the missing information can now be found.

I did find another record for this couple in the “Iowa, County Marriages, 1838-1934” collection.  [Shown below.] But that record does not contain all the info I found the first time. 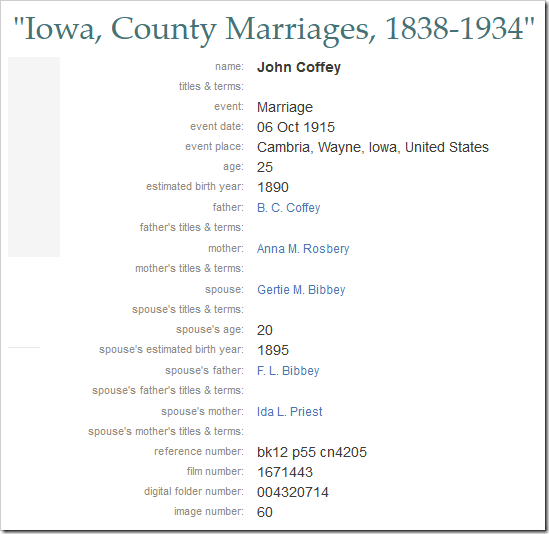 So, what’s going on?

I’m left wondering if I now need to check every source that I have retrieved from FamilySearch.org to assure they still provide the exact info that I originally recorded!?

Hopefully, I’ve provided enough info for you to clue me in on these changes.

First I apologize for heavily editing your message. I hope I didn’t lose the gist.

Despite the different system origins, the two records you’re looking at are almost certainly from the same original. I’ve quite often seen collections in the past that contained two entries with different system origins for the same original record. This occurred when records from one database system were copied into another. Then the records from both systems were copied into FamilySearch Record Collections.

But what you’re seeing is troubling. FamilySearch has the same record in two different collections and neither is complete. Let me sum up the differences:

I will ask FamilySearch what is going on and get back to you.