“Elder Allan F. Packer and I recently met with Family History Department employees and missionaries in our annual department business meeting,” wrote Dennis Brimhall, FamilySearch CEO. The Family History Department is the family history arm of the Church of Jesus Christ of Latter-day Saints. Elder Packer is the executive director of the department and serves as chairman of the board of FamilySearch. Brimhall reported on the meeting in a recent blog post.

“We…had several Family History Department leaders give a peek into some of the exciting new developments that will be coming in 2014,” wrote Brimhall.

Steve Rockwood, director of Worldwide Support Services (I don’t know his FamilySearch title) talked about the department’s efforts to service patrons worldwide. He also introduced a new booklet, My Family: Stories that Bring Us Together. I’ll talk about that more tomorrow.

Rod DeGiulio, director (and FamilySearch senior, executive vice president of records) showed a touching video illustrating the impact that volunteer indexing has. He said that in 2014 there will be a new indexing platform. The new platform should attract more indexers as well as increase quality and accuracy.

Craig Miller, director (and FamilySearch senior vice president) of product development announced that a mobile app is under development and will be available in 2014. He showed a video showing how it will work. He said that in the future you’ll be able to use the camera on your mobile device to capture photos and video and instantly add it directly to Family Tree. (Click the image below to see the video.) 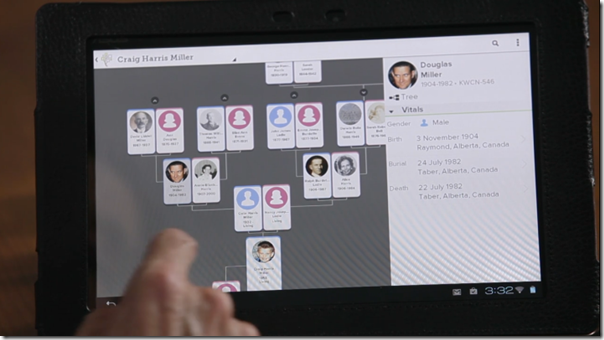 Miller announced the progress that Family Tree is making, collecting sources. New FamilySearch, in its eight years, gathered 56,000 sources. Since the introduction of Family Tree, users have contributed more than 6.4 million sources.

“I want to thank everyone for all their help and their dedication to this great work,” wrote Brimhall. “We couldn’t do it without you.”