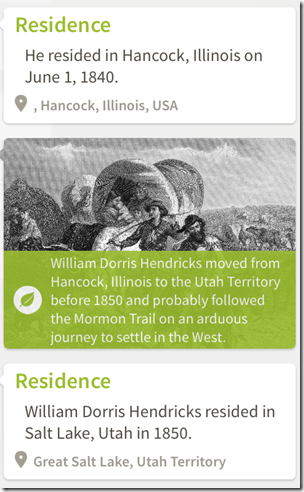 Ancestry.com released a cool new feature last week for its Apple app: Historical Insights. In their blog, they wrote:

So how does it work? In some ways, insights are like hints. While we can’t be positive that your family member experienced a certain event like the San Francisco earthquake, we use information you’ve added to your tree and historical records to determine whether your relative might have been in the city in 1906 when it occurred. And like hints, you have the ability to accept an insight and keep it in a person’s profile or ignore it.

User feedback was pretty positive. Either they loved it, or they wanted it on their non-Apple device. Ancestry.com wrote their intention to add it to their website app. Nothing was said about any other mobile device.

In my brief look at the feature, I was impressed. In the example to the right, Ancestry.com detected an ancestor who lived in Illinois in 1840 and Utah in 1850. It surmised (correctly) that he had immigrated on the Mormon Trail.

Some hints have pictures, some don’t. All have the barely legible not-quite-white text on a lime green background. (I’m always mystified that interface designers are more concerned about aesthetics than legibility. But don’t get me started…)

The success of the feature will depend on two things: can they assemble a large enough store of historical facts to make the feature worth their efforts, and can they present pertinent hints to the right people. For one of my ancestors who left Vermont, they mentioned the volcano eruption that caused the year without a summer. That’s a good call on their part. That’s an important events that many people don’t know about that precipitated a large number of people to leave Vermont. For another ancestor they mentioned that he was living in Kentucky where they may have witnessed “the night the stars fell.” That’s another cool event, but they need not associate it with Kentucky. It was visible across the entire country. They did make some bad calls. My American born and died ancestors were almost certainly not affected by the discovery of gold in New South Wales and may not have been affected by immigration precipitated by wars in Europe.

This is a great feature. It has the potential of becoming a strategic tool that could bust through brick walls. I hope they continue to hone it into an important tool for understanding why our ancestors did what they did.

For more information, see the announcement on the Ancestry.com blog.