Some of you are aware that FamilySearch Family Tree has a predecessor: new.FamilySearch.org (NFS). NFS is not used much, as it was never available to the general public and has been read-only for more than a year. Last November, FamilySearch announced it would turn off NFS on 1 February 2015. (See my blog article, “FamilySearch Announces Retirement of New.FamilySearch.org.”)

Consequently, I was surprised when FamilySearch announced last week that “the new.FamilySearch.org website was recently closed down.” I checked the URL (https://new.familysearch.org/) and found that was not true. It was still there and still bore the announcement of a 1 February 2015 shutdown: 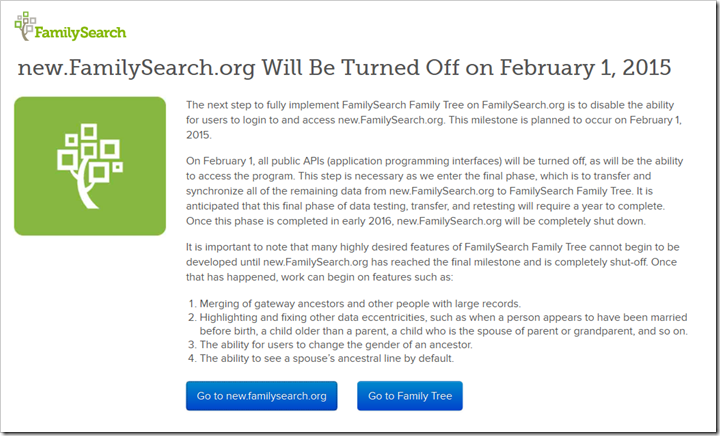 I thought last week’s announcement was confusing in another way, as well. The Q & A portion of the announcement starts with this:

Q: Why have the engineers decided to shut down new.FamilySearch.org before it and Family Tree are separated[?]

A: The new.FamilySearch database and Family Tree have always been separate databases. We cannot shut down one and start the other, especially when they are so different. To address this issue, we’ve allowed a period of time where the two databases are synchronized. This means that data can be entered in one and it will show up in both databases…

I think FamilySearch is really trying to answer two questions at once. Here’s what I think they are trying to say:

Q: Why have the engineers decided to shut down new.FamilySearch.org before it and Family Tree have separate databases?

A: New.FamilySearch.org and Family Tree already have separate databases. However, the two databases are synchronized. This means that data can be entered in one and it will show up in both databases.

Q: Why are the two synchronized?

A: Using Family Tree is very different from using new.FamilySearch.org. We could not shut down and start the other without confusing users, especially since the two are so different…

I wish the Q & A had several more questions and answers.

Q: Will shutting down new.FamilySearch.org remove the limitations that synchronization has imposed upon Family Tree?

According to the message currently on http://new.familysearch.org, the answer is “no.”

In early 2016, new.FamilySearch.org will be completely shut down.

It is important to note that many highly desired features of FamilySearch Family Tree cannot begin to be developed until new.FamilySearch.org has reached the final milestone and is completely shut-off. Once that has happened, work can begin on features such as:

That leads me to ask another question:

The message currently on http://new.familysearch.org again provides the answer:

On February 1, [2015] all public … interfaces…will be turned off, as will be the ability to access the program. [In other words, new.familysearch.org isn’t going away, just public access to it.] This step is necessary as we enter the final phase, which is to transfer and synchronize all of the remaining data from new.FamilySearch.org to FamilySearch Family Tree. It is anticipated that this final phase of data testing, transfer, and retesting will require a year to complete. Once this phase is completed in early 2016, new.FamilySearch.org will be completely shut down.

That leads me to my final question:

Q: What is the “remaining data” to be transferred and synchronized?

The answer might be this information from the Q & A and a comment posted online by Ron Tanner.

To help users identify the actual individuals who were combined in new.FamilySearch, we are planning to create sources on each person in Family Tree that refer to the original AF, PRF, and IGI records. (Q & A.)

We will be migrating the IGI sources from NFS over into Family Tree. These sources will link over to the records which contain the film and batch numbers. (Ron Tanner.)

That’s exciting. I can’t wait for these sources to be added to Family Tree, as well as the ability to clean up the problems in Family Tree.

To see the remaining questions and answers, see “Why Was new.FamilySearch.org Turned Off: Frequently Asked Questions.”