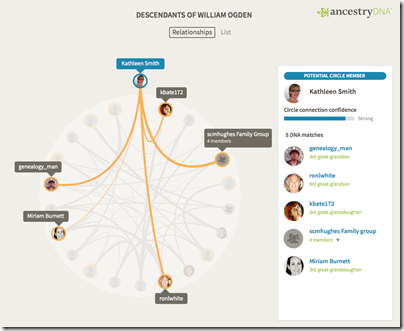 I confess. What you’ve been reading the past two weeks and what you will read next week were written back in March. I’m on the road at the moment with no time to write. So of course Ancestry.com picks this time frame to make a big announcement. They’ve announced a new feature called “New Ancestor Discoveries.” They pre-announced the feature at RootsTech during their luncheon. You can read about it here: Ooops. I guess I never got my notes of that presentation written up for an article.

Well, as I say, I don’t have time to write, so I’ll just point you in the direction of the official AncestryDNA marketing stuff:

I haven’t had time to look at much of this. I assume the basic marketing message is repeated in every one of these, but I would expect a little different new information in each.

Meanwhile, I’m running out of the articles I pre-wrote before I got busy. So if you don’t hear much from me, you’ll know why…