At RootsTech last month, Crista Cowan and Juliana Szucs presented a session titled “Getting the Most Out of Ancestry.com.” Unfortunately for me, the session was absolutely packed. Every seat was taken in a very large conference hall. Apparently, everyone wanted to attend, including the fire marshal who stood alongside another hundred people lining the walls and jamming the doorways. I was unable to get in. 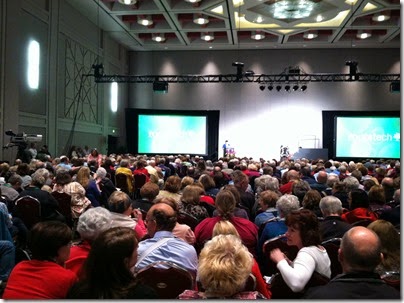 Fortunately for you, the session was recorded and is available for viewing on the RootsTech website at http://rootstech.org/video/4055721878001. 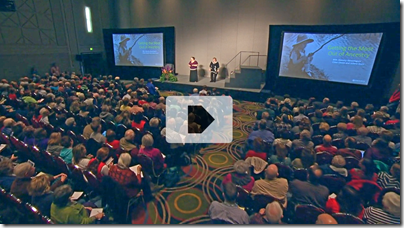 Fortunately for me, I was able to attend most of Michelle Ercanbrack’s FGS session, “Hidden Treasures at Ancestry.com.” Michelle filled in for Loretto Dennis “Lou” Szucs. (Lou! We missed you!) Afterwards she passed out Valentine’s Day chocolates! I’m at the point in my RootsTech/FGS conference reporting where all you’re going to get is pretty much a dump of my notes. Sorry, Michelle. Bribing me with chocolate usually gets you uncommonly good coverage.

Ancestry.com has many databases that are hidden treasures.

To get a list of state censuses, Michelle uses Google and searches for [list of state censuses]. (Don’t enter the square brackets.) Check the list for the state and year of interest. Then go to Ancestry.com and see if they have it. Another approach is to search Google for [State Census site:ancestry.com]. Database descriptions are important because some censuses are missing some counties. Michelle showed an Iowa census as an example of a census that contains lots of information.

New York, Census of Inmates in Almshouses and Poorhouses, 1830-1920 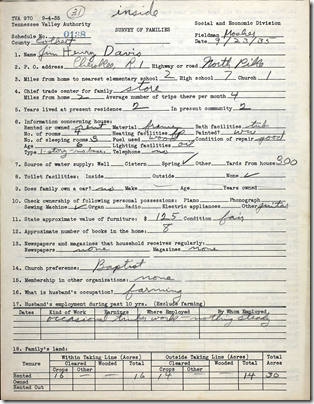 U.S., Tennessee Valley, Family Removal and Population Readjustment Case Files, 1934-1953. Dams to control flooding forced some families to move. More than Tennessee families were affected. An example is Jim Henry Davis. The form shows the miles from school and store. It asks for information about employment, religion, expenses of running farm, wages, names and ages of children, and how they feel about moving.

A closely related collection is the Tennessee Valley Cemetery Relocation Files, 1933-1990. Don’t forget to check the back, as some have additional notes.

Some passenger lists are overlooked. Ancestry.com has 133 collections, including border crossings. They have databases for all major U.S. ports.

Naturalization Indexes. Michelle showed an example from Lou Szuc’s family. They found a William Huggins naturalization record. They are pretty sure it is for their ancestor because the witness, Michael Meehan, was also sponsor for several of his children’s baptisms. The witnesses knew the people well.

1890 Veterans Schedules – This is an incomplete collection. It contains only parts from Kentucky through Wyoming, and select U.S. vessels. If there is something circled, it means there is additional information elsewhere. (I didn’t catch where.) In some cases, confederates were included, but some will be found crossed out. Widows sometimes reported her husband’s service, even though soldier had died.

U.S., Sons of the American Revolution Membership Applications, 1889-1970. Contains only those applications that were accepted. Basically, an application contains their genealogies. Consider it the equivalent to an online tree. Some included sources, but there could be errors. They didn’t have the wealth of sources we have today.

Civil War Prisoner of War Records, 1861-1865. Michelle showed an example with a note that had interesting details.

U.S., Revolutionary War Pension and Bounty-Land Warrant Application Files, 1800-1900. Often took the land and turned it. There are 80,000 application files for pensions for service, disabilities, or widows.

US City Directories, 1821-1989. Make sure to check city’s year ranges. These have OCR indexes, so sometimes you can get some “funky stuff” (indexing errors). They are basically a phone book, so Michelle accesses them like that. She doesn’t rely on search. Some pages are out of order. Some also have local histories, business directories, church lists, and fraternal society lists.

U.S. School Yearbooks, 1880-2012 is another fun collection. Look for your grandparents. Michelle loves those pictures because it is not how she knew them. There are almost 300 million records in this collection.

Quaker collection – This is the largest online collection of Quaker records. There are multiple databases. See http://ancestry.com/cs/us/quakers

On the search page, scroll to the bottom right corner for links to ethnic pages such as African-American Collections. The Jewish Family History Collection is a result of a half-dozen different organizations coming together with lots of volunteers indexing.

Some people have not noticed the tabs above the map on the search page. These allowing browsing to country pages.

Know the Records: Search for any name, look at a record, and see what is included and what is indexed. Form a search strategy based on that. How are the records organized? Watch for notices, such as the one reminding you that Swedish birth records are in Swedish.

London, England, Clandestine Marriage and Baptism Registers, 1667-1754 – there are some very old, awesome stuff in this database. Spend some time within these databases to see what is available.

The Ancestry.com Learning Center – There is a link to it on the top menu bar. Among other resources are research guides for many of the states and 30 guides on reference topics.

Five Minute Finds – These are short, instructional videos. There are links to them on the learning center page. Or you can go directly to YouTube and find them there. There are also hour long videos.

The Ancestry Wiki is accessible via the Learning Center. It contains the contents of the Red Book and The Source. “This is my Bible,” Michelle said. “Combine this with database descriptions and it is unstoppable.”