Here’s an interesting contrast. A recent study by Oxford University showed regional pockets of DNA in England. A recent article on the Ancestry Blog showed estimated Irish ethnicity throughout the U.K. and Ireland.

I read about the Oxford study on The Telegraph website, in the 18 March 2015 story, “Britons Still Live in Anglo-Saxon Tribal Kingdoms, Oxford University Finds.” Science Editor Sarah Knapton wrote, “Britons are still living in the same 'tribes' that they did in the 7th Century, Oxford University has found after an astonishing study into our genetic make-up. Archaeologists and geneticists were amazed to find that genetically similar individuals inhabit the same areas they did following the Anglo-Saxon invasion, following the fall of the Roman Empire.”

This is a map from the Oxford study: 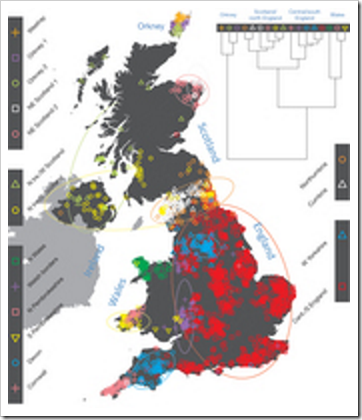 For St. Patrick’s Day, Mike Mulligan wrote “What does our DNA tell us about being Irish?” on 16 March 2015 in the Ancestry Blog. “As the first results of UK & Ireland tests come through we can start to build up a picture of ethnicity estimates not just for individuals but averaged across all those born in the UK or Ireland. What is particularly fascinating about the map below is that it has been compiled using just AncestryDNA results.”

This map from the AncestryDNA study shows the average amount of estimated Irish ethnicity in regions of the U.K. and Ireland. 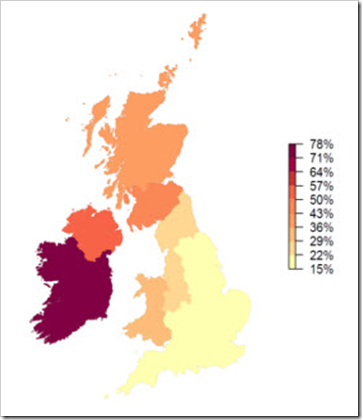