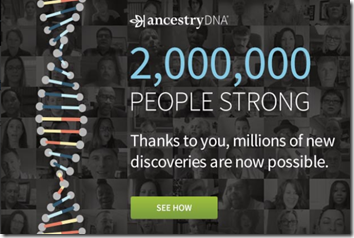 Ancestry.com announced last week that their DNA database has reached two million test results. “We are excited to announce that AncestryDNA has just reached the 2-million-tested milestone,” said Anna Swayne, AncestryDNA product manager. “It was just a little over 11 months ago that we reached the 1 million mark, so the AncestryDNA database has doubled in just short of one year.”

Through their DNA product Ancestry has found 7.4 million probable cousins of 3rd degree or closer. They have estimated 7.7 new “Ancestor” Discoveries. (More correctly, those are “Relative” Discoveries. See my article, “AncestryDNA New Ancestor Discoveries.” The have established 5.1 million DNA circles.

AncestryDNA is now available in 37 countries. Ancestry.com has 70 million trees and 17 billion records.