OneWorldTree (OWT), like FamilySearch's Ancestral File, was an attempt to build a single, unified pedigree containing all of the people and data from Ancestry.com's records. Computers were used to identify and merge records about the same person. When it was released in April 2004 it contained all the families that could be identified in the 1930 census plus trees submitted to Ancestry World Tree (AWT) through the Ancestry.com website. Initial plans were to merge in all of Ancestry.com's records, but as time passed, I believe the only other records added were AWT trees from RootsWeb and maybe family trees from World Family Tree (WFT).

The OWT database requires an Ancestry.com subscription to use and has two different modes: classic and read-only. The classic mode allows users to clean up their view of the OWT data, adding individuals and data, choosing among conflicting parents and spouses, linking additional Ancestry.com records to individuals and otherwise fixing mistakes. However, customers' customizations were visible only to themselves. Some of the initial messaging to customers said that user corrections and additions would periodically be incorporated into the globally-visible tree, but it was later discovered that the website Terms and Conditions did not give Ancestry.com the right to do so, so this plan was abandoned. 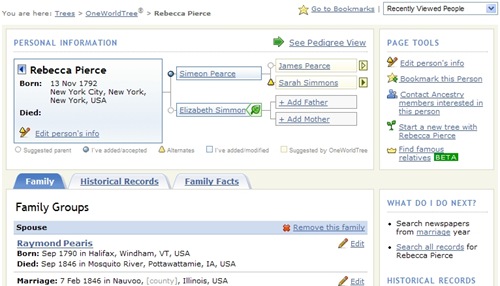 When Ancestry Member Trees became available, the ability to make changes in OWT was removed, rendering it read-only to new users. Classic mode was retained for those customers that had previously made customizations. Ancestry.com provided a migration path so these customers could move their OWT additions into a Member Tree. As far as I know, since that time Ancestry.com has ceased improving OWT. 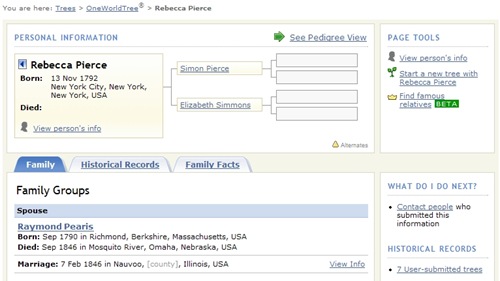 In my opinion, like Ancestral File before it and New FamilySearch's Family Tree after it, OWT suffers from unmerged-duplicates, incorrect merges, endless loops and known inaccuracies. Still, Ancestry.com is able to use it as the basis for showing users' relations to famous individuals.