You may have been able to tell from my last two articles (here and here) that I loved Ron Tanner’s presentation last Saturday. But I’ve saved the best for last. Keep in mind Tanner’s humorous presentation style, wrapping serious information in mock-seriousness. (While it plays extremely well live, it can be misinterpreted in written form.)

So when I tell you that Tanner laughed at us immediately after asking if any of us thought New FamilySearch improved genealogy, I don’t want you to write and complain to your son’s grand-father-in-law, the General Authority (high official) at the Church of Jesus Christ of Latter-day Saints, sponsor of FamilySearch. You’ll get both me and Tanner in trouble.

In mock-comedic seriousness, Tanner warned us that the proposal he was going to share with us was all theoretical. These were ideas being tossed around. He not only invited us to share are reactions with him, he passed out 3 x 5 cards, invited us to write down our feedback, and at the end of the presentation he conscientiously collected them.

To set the stage, Tanner asked us what might be the capabilities of an ideal family tree system. He suggested we would ask for (contrast these with NFS, if you will),

Tanner then proposed ideas that sounded like genius to me. Sure, he was pretty much quoting ideas I published last year, but hey, I recognize genius when I see it.

Tanner announced that we would be the first sentient beings outside FamilySearch to hear the top-secret, internal project name for this proposal. He mockingly made us raise our hands and swore us all to secrecy. Then he revealed the internal code name:

SCOE proposes a new human pedigree that encompasses all the principles that Wikipedia uses to make it such a successful, massively collaborative project. SCOE will be freely editable by any registered user. That’s the “open edit” portion of the SCOE moniker.

And it will establish a community where sources, polite discussion, and dispute resolution procedures lead conclusions to converge towards best possible values as judged by genealogical community standards, backed by proper evidence. That’s the “source centric” part of SCOE.

I know some of you are anti-Wikipedia ideologues. Tanner had at least one attending his presentation. While academia has been loathe to give any nod to a publication that favors “consensus over credentials” (see “Wikipedia”), Tanner shared a 2006 review of Wikipedia by Library Journal. The review concluded that,

While there are still reasons to proceed with caution when using a resource that takes pride in limited professional management, many encouraging signs suggest that (at least for now) Wikipedia may be granted the librarian’s seal of approval.

In its short lifetime, Wikipedia has racked up some awfully amazing stats: 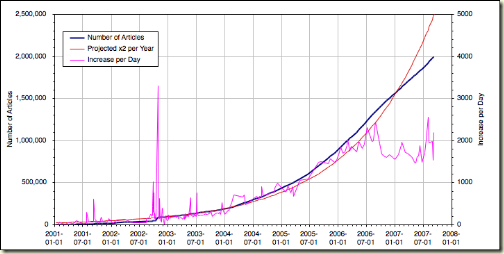 As to the accuracy of Wikipedia, Tanner said,

I did an experiment to see how quickly incorrect information was detected and corrected on Wikipedia. I vandalized… er… I mean, some unnamed individual went out and introduced wrong information on the solar system page. The page was restored to the prior version within 27 seconds.

(I hate to tell you this, Ron, but as you yourself mentioned in your presentation, another precept of Wikipedia is that changes are all logged so that undesirable members of the community can be held accountable. The Wikipedia solar system history page shows every change that has ever been made to the article.)

As a second test, the dragon page was modified. The thinking was that the solar system article might be too mainstream, but a less popular page might be watched less carefully. Not only was the dragon page restored in 26 seconds, but a helpful message was included, discouraging addition of information that cannot be substantiated.

FamilySearch tested a basic prototype of an openly-editable tree system with a group of people from a broad range of genealogy and Internet experience. FamilySearch discovered that users can become comfortable with such a system if

“We’re thinking about having theories, with reasoning, and one theory can be set as a conclusion,” said Tanner. “We’re looking at making the system more consistent with genealogical best practices.”

Tanner said that a Source Centric Open Edit system must:

1. Provide a genealogy-structured interface rather than the free-style format of a traditional wiki system

Registered users have to provide contact information. We’ll verify e-mail addresses by sending them a message as part of the registration process.

3. Allow restoration of previous values after data is changed

Each person page would have an associated history page that logged and captured every change, as with the history page for the Wikipedia solar system page. Like Wikipedia, it must be simple for a user to restore a previous version of the page.

As we’ve seen from Wikipedia, these features are critical to facilitate friendly discussion and avoid inadvertent errors or vicious vandalism (not viscous, as my spell checker suggested).

Administrators need to be able to lock a page from view or edit. This is needed as part of dispute mediation. It’s needed for groups such as the Japanese burakumin, for specific individuals, medieval families, and famous or infamous persons.

7. Mediation of conflicts between contributors.

In conclusion, Tanner reminded us that these are just ideas being thrown around. He asked us to give him our suggestions, as they’re still thinking this all through. He had us think back to the beginning of the presentation, when an open edit system sounded insane. He said, that while we might not be totally convinced, he wanted us to sit on it.

“Now aren’t you thinking that maybe this could work?” he asked. “This is still just research. We may not do any of this.”

Tanner had a couple of minutes to answer questions, and attendees didn’t hold back. (These are not quotes.)

Q. Won’t vandalism be a big problem?
A. Sure, It’s a problem in all open systems. We’ll need community administrators. Wikipedia has 2,000 volunteer administrators.

Q. What do the General Authorities think about this proposal?
A. I’ve talked this over with Elder Maynes and Elder Sybrowsky. Their biggest concern is over inappropriate images.

Q. How long will temple reservations last?
A. Forever. Forever. Seriously, we realize this needs to be looked at.

Q. When will SCOE happen?
A. I have preliminary approval to proceed with this project. If I were King, I would have the beginnings of this start in February or May. Maybe the first step will be the addition of discussion pages. The full treatment is a year or two away. I’m trying to get the features added incrementally.