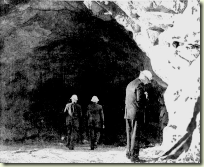 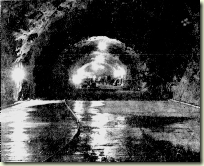 It’s Vault Vednesday! This is another in a series highlighting the Granite Mountain Record Vault (GMRV) and the NGS Family History Conference coming to Salt Lake City, 28 April—1 May 2010.

In the early ‘40s, FamilySearch sponsor, the Church of Jesus Christ of Latter-day Saints, decided to build a storage chamber for preservation of the priceless microfilm negatives produced by FamilySearch predecessor, the Genealogical Society of Utah (GSU). Preliminary investigations were made of several sites and a site in the Wasatch Mountain Range was selected.

In 1958 engineering surveys and a 500-foot test core confirmed the site was solid granite, without excessive moisture. The storage facility could be viably excavated inside the solid granite at a cost similar to other proposals. Final approval was granted in 1959.

Construction began in the summer of 1960, extending 500 feet into the mountain side. Three-fifths of a mile of solid granite would be excavated. 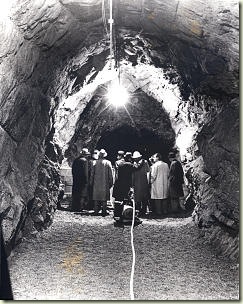 You may recall when I left you last week that I was about to mention the best thing about the conference. So, let’s get right to it…

…right after this commercial message.

We now return to today’s installment of “Vault Vednesday.”

Now that you’ve decided you have room to improve your genealogical maturity, how are you going to do it? The best thing about the 2010 NGS Family History Conference is the amazing array of classes. Ten tracks run simultaneously each day. That’s right: ten. During each 60 minute class hour, you have ten different choices, so you’re virtually guaranteed to find something spot-on useful to you. The ten tracks vary slightly during the four days, filling five time slots with the country’s absolute top genealogy experts.

If you were to try and buy books to cover the same knowledge, you would pay many times the price of the conference. And then you’d have to try and motivate yourself to read all of them; you know you’d never get around to covering them all. Why not come and listen to the authors in person, in an environment where you can slip out and apply the learnings at the Family History Library (FHL), or the FHL computer lab provided onsite at the convention center. Handouts for all classes are included on the conference CD-ROM syllabus, for convenient reference after the conference.

If you’re serious about increasing your genealogical maturity, then the 2010 NGS Conference is a must attend event. Combine that with Jay Verkler’s keynote, the Granite Mountain Record Vault virtual tour, jam-packed exhibit halls, the special GenTech exhibition hall, and the Family History Library. I’m telling ya, if you don’t come to this conference, you are going to regret it for… for…, well, for a while, anyways.

And I haven’t even told you about the special event…