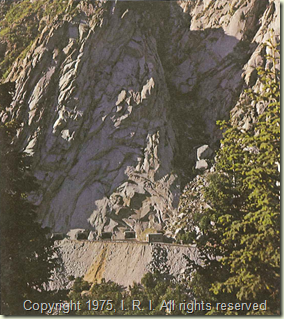 Hooray! It’s Vault Vednesday! This is another in a series highlighting the Granite Mountain Record Vault (GMRV) and the NGS Family History Conference coming to Salt Lake City, 28 April—1 May 2010.

For over 70 years FamilySearch has been sending photographers out microfilming copies of the world’s genealogical records. Today, most of the microfilm cameras have been replaced with specialized digital cameras. To safeguard these priceless records, in the early 1960s FamilySearch sponsor, the Church of Jesus Christ of Latter-day Saints, constructed six interconnected, protective vaults under 700 feet of granite. Some 20 miles southeast of downtown Salt Lake City, four entry tunnels breach the rock wall 400 feet above the Little Cottonwood Canyon road. 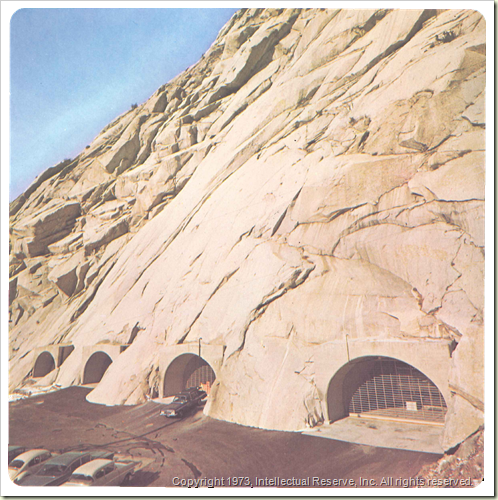 Notice the teeny parking lot and the old cars.

I can hardly wait for the 2010 NGS Conference. Pre-conference stuff starts on Tuesday, 27 April; I may talk more about that stuff later.

Did I mentioned last week that the opening keynote will be given by Jay Verkler? Bright and early Wednesday, 28 April 2010 Verkler will speak to the topic, “From the Granite Mountain to the Ends of the World.” According to the conference brochure, attendees will

take a never-before-seen video tour of the largest repository of genealogy records in the world—the Granite Mountain Records Vault. The Vault protects billions of records gathered from governments, churches, and other archives around the world.

From there, the tour continues as we explore trends and resources that will enable these and other records to be viewed worldwide.

Can’t afford to go? (A better question might be, can you afford not to go!) Next time I’ll talk about an opportunity that is free to everyone. Stay tuned…