Last year I intended to do stupendously rich articles about Ancestry.com Bloggers Day presentations. Since I never got around to it, this year you’re getting my stupidously poor notes.

Mike Wolfgramm and Jonathan Young gave us the last presentation prior to lunch. Yesterday we talked about Dexter, the flexible content digitization pipeline. Today we will talk about:

Having these facts separate makes the records searchable.

Wolfgramm and Young showed us the example below. I’ve circled items in these colors: 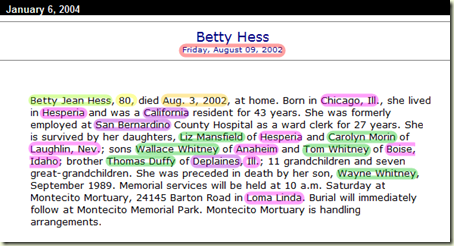 Below I’ve included the corresponding record from the Ancestry.com U.S. Obituary Collection. I’ve circled items with the same colors as above so you can easily compare the two. As you can see, the algorithm did pretty darn well, for a stupid computer. It got the name of the deceased wrong, but did pick it up in the list of others mentioned. It got the obituary publication date wrong. The algorithm missed three locations (circled in purple): California, San Bernardino County, and Deplaines, although that last one is probably a misspelling of Des Plaines. It got the seven locations circled in pink. Lastly, it picked up all six names of other people. 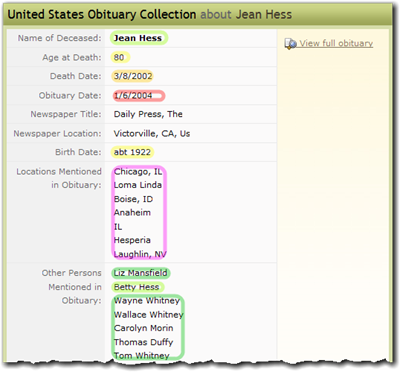 Interestingly, this same, exact obituary also appeared in another newspaper and was picked up by Ancestry.com a year earlier. Back then, the performance of their named entity extraction technology apparently didn’t work as well. Notice in the record, below, that no names were picked up. 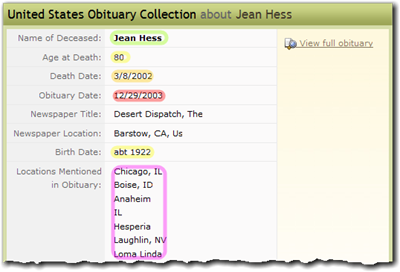 I asked why the dates were displayed ambiguously, rather than spelling the month out. Wolfgramm explained that they received the data from a third party in that format. He told us that they could fix the problem. Sure enough, within a couple of days, Ancestry.com had the problem fixed. Wow! I wish I could get all bugs fixed that fast!

The solution is a vertical search engine that can measure closeness:

Finally! We made it to lunch time! Lunch was with Tim Sullivan and Andrew Wait.