When was the IGI?

With the release of the new FamilySearch.org website, many are asking where the International Genealogical Index (IGI) went. To understand where it went, you first need to understand what it is and where it came from. This week I address the what, when, whence, why, and where of the IGI. 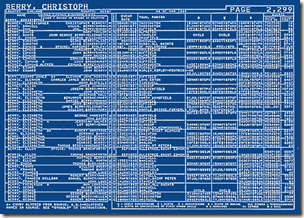 When was the IGI?

The IGI was originally known as the Computer File Index, according to the book Hearts Turned to the Fathers.1

According to Elizabeth Nichols, retired FamilySearch employee, it was first published on microfiche in 1973. It contained 20 million entries, consisting of all names gathered since October 1969, and six million of the names gathered before then. About 80% were extracted.2, 3

The 1975 edition contained 34 million names. The fourth edition, published in 1981, was the first to be called “the International Genealogical Index” and contained 81 million names. By 1984, the name count had grown to 108 million and the IGI was offered for sale to the public.1

In 1988 it was published on compact disc as part of the FamilySearch DOS computer program and contained 147 million names. Because of computer system changes, some extraction entries from the 1984 edition had to be left out. They were included in a later edition.1, 3

The 1992 edition was published on microfiche and contained 187 million names. About 94.5 million entries (50%) were extracted. Nearly 90% of the 72 million entries for the British Isles came from extraction. The compact disc version took until November 1993, becoming the March 1993 Compact Disc Edition. It contained over 200 million names from over ninety countries. Few, if any, extraction records were added.1, 2, 3

“Creating a compact-disc version of the IGI became problematic. Amassing the names from the various files created in different databases and by different systems was a technical nightmare,” according to Hearts Turned.1 This may explain why the 1994 edition—released in July 1995—consisted of an addendum to the previous edition. The addendum held 42 million entries. Many of the additional 5 million extracted names were those dropped from the 1988 edition. Many of the member submitted entries were duplicates, coming from newly digitized pre-1970 submissions and from TempleReady.4

The 1997 edition of the IGI, repeating the pattern of the previous edition, was published as an addendum. The number of entries increased from 240 million to 284, of which, about 100 million were from extraction.5

Rumors that a FamilySearch website—without the IGI—started circulating in early 1999.6 In early March the Church (of Jesus Christ of Latter-day Saints) issued a statement confirming that a website was in the works7 and on the first of April announced the beta test.

The official announcement and release of FamilySearch.org came on 24 May 1999. The press release noted the inclusion of the International Genealogical Index. Not all 285 million entries were available immediately. Said the release, “The IGI will be made available in phases by region.”8

Tomorrow: “Whence is the IGI?”

1. James B. Allen, et. al., Hearts Turned to the Father, a special issue of BYU Studies 34:2 (1994-95), pp. 306, 317-9; digital images online (http://byustudies.byu.edu : accessed 28 December 2010). This is a history of FamilySearch as the Genealogical Society of Utah and the family history department of the Church of Jesus Christ of Latter-day Saints. It was also published as a hard-cover book.