Why Was the IGI?

With the release of the new FamilySearch.org website, many are asking where the International Genealogical Index (IGI) went. To understand where it went, you first need to understand what it is and where it came from. This whole week I have been addressed the what, when, whence, why, and where of the IGI.

Why was the IGI?

…created and published primarily to assist members of The Church of Jesus Christ of Latter-day Saints (LDS) to identify their ancestors and other relatives for the purposes of verifying whether temple ordinances have already been completed for them and to further their research into their ancestral lines.1

As I mentioned previously, I think the original, idealized objective of the IGI was the creation of one individual entry for each person who had ever lived and one marriage entry for each couple that had ever wed. Consequently, it is an index of individuals and couples rather than an index to original records.

Over time the value of the file to the general public was recognized and in 1981 it was renamed the International Genealogical Index.2 However, the purpose of the IGI did not change. And the Church continued trying to avoid adding duplicates. As you will see momentarily, this compromised its value to the general public.

“Extracted records…that were duplicates of patron-submitted entries [were] not added to the IGI,” wrote Nichols.3 “If an entry was already in the file through another source, the duplicate entry from the extraction program was not added.”4

Let’s look at an example. Twenty people in Batch C 2286-2 named Bull were extracted from the parish records. The detail below from the Parish Printout (dated 1977) shows 12 of them:5 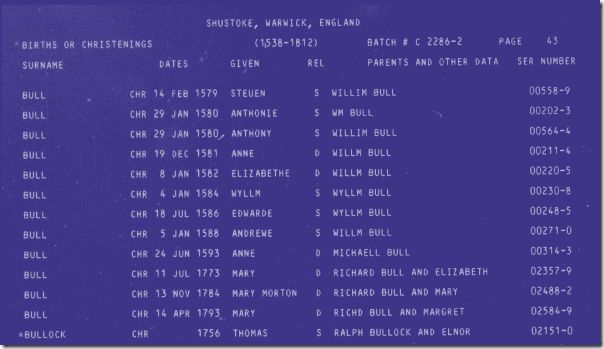 Search Batch C022862 for surname Bull and it shows the IGI contains but 11 of the 20. (See the illustration on the right. Just for the heck of it, on the left I’ve also shown the results of the same search on the new FamilySearch.org website. And you thought you could no longer do batch number searches! Pish, posh! But I’m getting ahead of myself…) 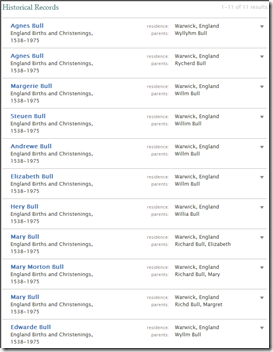 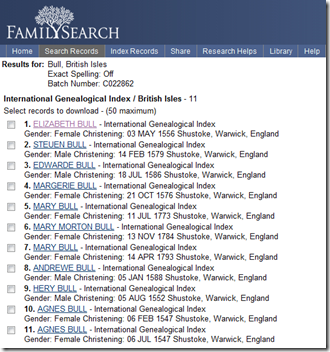 Compare the IGI with the Parish Printout and you will find these are the 9 entries missing in the IGI:

Why are they missing? An IGI search in Warwick County, England for these entries shows matching member submissions already existed. (Click the Given name to see the IGI entry.)

(Come on; with that surname, you can’t tell me you didn’t know a bad pun wasn’t coming sometime!)

Tomorrow: “Where is the IGI?” Actually, I’m behind schedule. You may not see the article until next week.

5. You were probably hoping for a citation to the parish printout here. So was I. But I ran out of time. No matter. How I found it is fodder for a future article. Don’t let me forget.