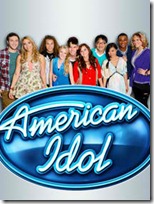 Surreal. That’s the word that describes my experience at the 2012 Southern California Genealogy Jamboree this past weekend.

Picture this. I’m sitting in the lobby of the Burbank Marriott and I think I see American Idol’s DeAndre Brackensick sauntering by wearing a genealogy t-shirt. Surreal.

Mind you, the conference itself was great. Paula Hinkel and team did a great job. Among other activities, I was a panel member for Thomas MacEntee’s “Blogger Summit Panel No. 2: From Blog Reader to Writer - Why and How.” Other panel members were Denise Levenick of the Family Curator blog, Melissa Shimkus of the Allen County Public Library Genealogy Center blog, and Elyse Doerflinger of Elyse’s Genealogy Blog: On a Journey to Find My Roots. Panelists were universal in their counsel to those contemplating starting a blog: just do it.

I admitted to audience members that writing a blog is intimidating. I know that on any particular subject many of my readers know more about my subject than I do. Thank you, then, to all of you kind people who said hello. It continues to strike me that anyone would take notice of me.

What, then, was surreal? For one thing, attendees were required to wear wrist bands. The last time I wore a wrist band was when I had floor tickets to a Billy Joel and Elton John concert. “Rock concert” and “genealogy conference” don’t exactly conjure the same images.

Also surreal was the dozens of gorgeous young people walking around the hotel standing in stark contrast to us conference attendees. The hotel was so crowded, some conference attendees were “bumped” to another hotel. Rumors identified this group as contestants for the television show, the Voice, or something similar for young singing talent. I asked one what was going on. He said simply, “music camp.”

Adding to the surreal experience, these weren’t the only singers around. The top ten contestants for American Idol were staying at the hotel, prepping for their 2012 American Idol Live tour. MyHeritage’s Mark Olsen was brave enough to talk to them. (See “Jamboree: Lights, Camera, Action, Idols!”) Soon Olsen and coworkers Daniel Horowitz and Schelly Talalay Dardashti had DeAndre and his mother on the tradeshow floor, interested in genealogy, and wearing a genealogy t-shirt.

The climatic surrealistic moment came on a full elevator, an American Idol star amongst us old geezers. There was a sudden moment of recognition. “Hey, I know you… You’re the Ancestry Insider.”