Perhaps horses are the wrong metaphor for the census indexing race. Not even marathons take this long. Yet another week has passed and there is no change from racers Ancestry.com or MyHeritage. Even the juggernaut FamilySearch coalition is taking months to complete the race.

They finished California! It was the 5th largest state in the union in 1940. Only New York, Pennsylvania, Illinois, and Ohio were bigger. California is the largest published state to date.

Also published in the last week: Iowa, Nebraska, New Mexico, and Washington. The status map is filling in quite nicely. 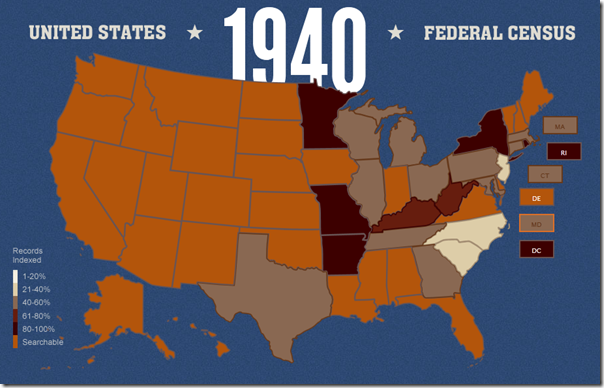 FamilySearch seems to have worked through the backlog of states done but not published. Only Rhode Island sits unpublished at 100%. Minnesota hit 100% briefly before dropping back to 99.

There’s more good news. After a brief turndown last week, indexing rates are back up over 30,000 pages per day.

You know what would be cool about now? Doing a new one-day indexing push. The Super-Bowl Super-Indexing Day was a lot of fun. I’ll bet now we could blow through those old numbers?