According to the 1830 census of Bainbridge, Chenango, New York, Ann Rogers had two young daughters.1 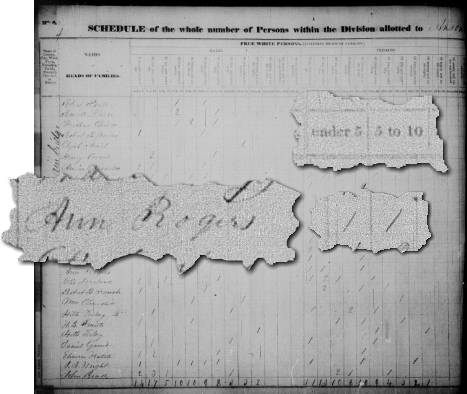 Susan M. Lemmon knew one was her great-grandmother, Hortense Rogers. After many years of searching, neither she nor her mother had learned the name of the other daughter. Ann Rogers was the widow of Henry Rogers who died leaving Ann to care for the two young children.2

Lemmon’s mother searched for many years before her passing in 2002. Lemmon then carried on the search. In 2009 she came across a message board post made back in 2000 asking for more information about Hortense. Lemmon posted her willingness to share what she knew.3

A genealogist—Sean Dixon I assume—came across an interesting sampler, a piece of needlework, in the Consignment Gallery of Portland Oregon. The Gallery specializes in quality home furnishings “from colorful Quimper pottery, Italian contemporary furniture, to stately antiques.”4

“I thought this was a little treasure that needed to find its way home,” said Dixon on her blog.5 “I find things like photos, Bibles, and needlework in antique shops and consignment stores. I reunite them with their families.”6 Dixon started looking for a descendent.7

“This woman found the inquiry I had left years ago and contacted me,” said Lemmon. “With the information she provided I was able to purchase the framed embroidery.”

The sampler contained a wealth of information. Not only did it identify the unnamed sister—Helen—it revealed the existence of a third child, Byron. “There was no previous knowledge that Byron even existed,” said Lemmon, “because he had died at 15 months of age.”

Several things had to happen before Susan Lemmon could learn about her great-grandmother’s siblings. Nine year old Helen had to create the sampler. It had to survive to the present. It had to make its way to Oregon and go on sale near the home of Sean Dixon. Dixon had to come across it and selflessly work to find a descendent. And Lemmon had to make herself findable by making a gracious offer to help others.

That is serendipity in genealogy.

5. [Sean Dixon,] “Wrought by Helen Rogers 1834,” Ancestorism: Close Encounters of the Genealogical Kind (http://ancestorism.wordpress.com/2012/03/30/hand-embroidered-family-tree-from-1834/ : posted 30 March 2012). The detail from the photograph of the needlework is from this article. Click on the link to see the entire sampler.