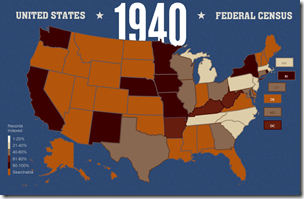 Two weeks have passed since my last update. Ancestry.com and MyHeritage have not released any more states.

In that two weeks FamilySearch has released: Alabama, Indiana, Maine, North and South Dakota, and Oklahoma (Okay). Twenty-four states have been published, comprising 21% of the work.

During that time indexing was completed for these states: California, Minnesota, New Mexico, Rhode Island, and Washington (for the 2nd time). Thirty-one states have been indexed. Add in partial states and we have hit two-thirds done.

However, not all is positive. According to my (the Ancestry Insider’s) measurements, the indexing rate has fallen. My numbers say that indexers were indexing about 33,000 pages per day up through my last update. In the past week, that figure has dropped to 29,000 pages per day.

Will this slowdown allow the other horses to gain any ground on the FamilySearch consortium? Stay tuned…