Serendipity in a Graveyard

Betty Martin was researching Samuel T. Foresman, Civil War veteran, husband, and father of three. Trying to find Samuel’s death date, Betty tracked him from Illinois to Michigan to Washington Territory. This is her story, in her own words:

“Through incidents too complicated to relate, I eventually discovered both Samuel and his father buried in the old Dungeness Cemetery in Sequim, Clallam County, Washington Territory. “But—there was no death date recorded on Samuel’s gravestone!” 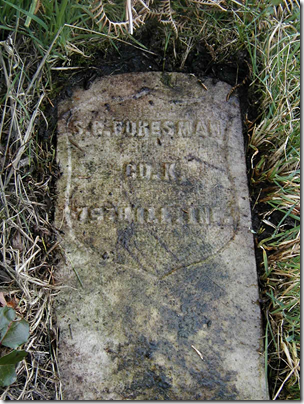 “Still determined, I contacted the Clallam County Genealogical society via email and I persuaded one of the staff to photograph Samuel’s gravestone for me, perhaps to reveal some unnoticed detail… Unbeknownst to anyone else, the staff member went to the cemetery to take the picture.”

One day it occurred to Martin that newspapers might contain the information she needed. She sent off an email to the staff member with this thought. The staff member wouldn’t read the email until later. You see, that was the day she went to the cemetery.

“As she was taking the photograph of the gravestone, another woman whom she’d never before met, ‘just happened’ to come to the cemetery that morning also and approached her.  She brought copies of some old newspaper articles and gave them to the staff member, saying they did not contain any information useful to her on her own ancestral lines.

“The staff member took the papers, and while perusing them, discovered this at the bottom: 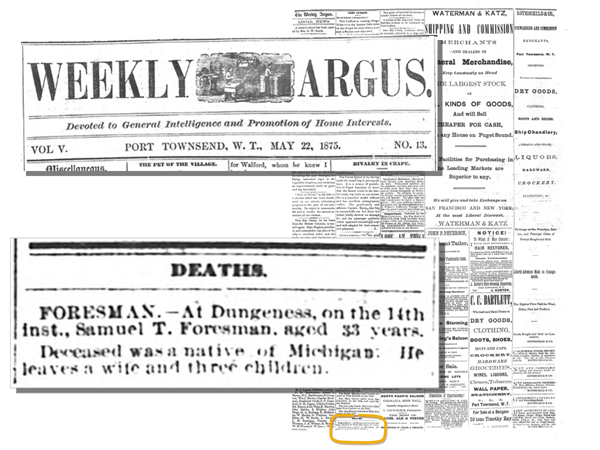 Think about it. What are the chances of

That, ladies and gentlemen, we call serendipity in genealogy.

Thank you, Betty, for sharing!