It has been almost exactly two years since FamilySearch retired the original, classic.familysearch.org website. (See “Classic FamilySearch is No More.”) I don’t remember them even giving a final warning specifying the exact date it would be shut down. Didn’t it just suddenly go away?

FamilySearch is giving signs that the shutdown is imminent. Recently FamilySearch removed the “beta” label from the new FamilySearch Catalog and added a message on the main page of the old:

As an insider I’ve seen several companies ask users for feedback before making a big change. In my experience, if you want your feedback acted upon, you have to give it before the change. Once the change is made, software engineers are moved on to new projects. If you wait to try out the new thing until you are forced to, and then give important feedback, it is rarely acted upon in a timely manner, if ever. Now we are in the last death throes of the classic catalog, you need to switch over immediately, discover the problems and inadequacies of the new catalog, and report them. A feedback button is prominently displayed on the home page of the classic catalog. You may or may not won’t get a final warning.

During the last two years FamilySearch has taken user feedback about the beta catalog, incorporated missing functionality, and fixed inadequacies. I made the switch more than a year ago. I found and complained about several problems—probably with many others—and FamilySearch fixed them. Now I prefer the new catalog.

One of the features FamilySearch proudly proclaims about the new catalog is that it has less pages. Instead, areas slide open, revealing additional detail. FamilySearch incorporates the philosophy across its website and I think it is a detriment, not an improvement. It makes it hard to bookmark, share a URL, or print a focused section of the website. I’ve complained before about FamilySearch’s stupid help system that expands a topic in place. When I’ve wanted to answer a reader’s question about FamilySearch.org by sending them to the answer in the help system, I can’t do it. There are no URLs to expanded topics. But I digress.

The expansion in place in the new catalog isn’t all bad. I find myself simultaneously expanding the vital records titles and vital record indexes titles. Since they are adjacent, I can see all the titles simultaneously. I’ve gotten quite used to that feature, something I can’t do in the old catalog. The same technique works with other record types as well. Here’s an example for probate records of Albany County, New York: 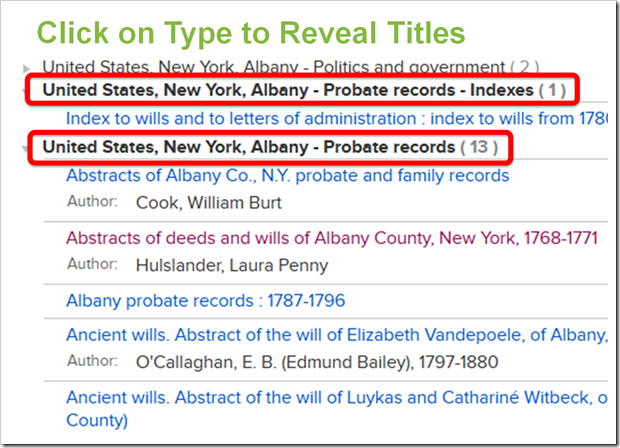 Another feature I like about the new catalog is the ability to specify two search criteria simultaneously. Let’s say you wanted to see what items the National Archives has produced about the War of 1812. With the old catalog this is nearly impossible. You could wade through 1,324 items matching the keyword “War of 1812.” Or you could search for author “National Archives.” That gives 68 authors. A couple dozen are variations of NARA current and past names, main and regional offices, and a few internal subdivisions. The others are national archives of other countries. Rifling through the couple dozen NARA authors, you would need to sort through 1,262 titles looking for the War of 1812. Or you could do a subject search of “War of 1812” and work some unknown number of titles associated with the resulting 13 subjects.

With the new catalog you simply search for “War of 1812” and “National Archives” at the same time. Wham, bam, done: 16 titles.

The new catalog also supports wildcards and quotation marks, although I’ve not had occasion to need them yet.

The classic Family History Library Catalog is going away. Switch now to the new FamilySearch catalog. Give feedback about it. And enjoy the new functionality.