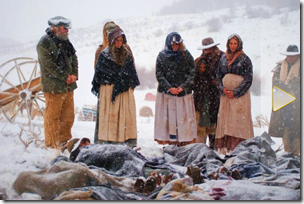 In 1856, two Mormon pioneer handcart companies were caught in a perfect storm of unfortunate circumstances that culminated in actual storms leaving two companies of pioneers—nearly 1,000 people—stranded and dying in deep snow on the high plains of Wyoming. They were without food, shelter, or sufficient clothing to survive. Over 200 would die before reaching the safety of Salt Lake City.

The tragedy and their heroic rescue has served as the subject matter for several movies by LDS movie maker, T. C. Christensen, who gave the Wednesday keynote at the BYU Conference on Family History and Genealogy. Most recently, Christensen wrote, directed, and produced the movie Ephraim’s Rescue. His past accomplishments include the movies 17 Miracles, Testaments, and The Work and the Glory. He has made several films about the Prophet Joseph Smith, including Joseph Smith: Prophet of the Restoration. He also made a movie about another Church president, Gordon B. Hinckley: A Giant Among Men.

Christensen told about the pioneers and showed several movie clips. One depicted Elizabeth Bradshaw nearly drowning as she crossed the North Platte River. Christensen had to shoot the scene in the summer, even though it actually occurred in winter, in zero degree weather. It would have been too dangerous to shoot in the winter. Even in 90 degree weather, after several hours the medical staff advised getting the actress out of the water because she was in danger of hypothermia.

He showed a movie clip dramatizing events from the life of Ephraim Hanks. To quote from Ephraim’s own words:

I retired to rest quite early, and while I still lay wide awake in my bed I heard a voice calling me by name, and then saying: “The hand-cart people are in trouble and you are wanted; will you go and help them?” I turned instinctively in the direction from whence the voice came and beheld an ordinary sized man in the room. Without any hesitation I answered “Yes, I will go if I am called.” I then turned around to go to sleep, but had laid only a few minutes when the voice called a second time, repeating almost the same words as on the first occasion. My answer was the same as before. This was repeated a third time.

When I got up the next morning I said to Brother Brown, “The hand-cart people are in trouble, and I have promised to go out and help them;” but I did not tell him of my experience during the night.

I now hastened to Salt Lake City, and arrived there on the Saturday, preceding the Sunday on which the call was made for volunteers to go out and help the last hand-cart companies in. When some of the brethren responded by explaining that they could get ready to start in a few days; I spoke out at once saying, “I am ready now!” (See Ephraim Hanks, “Ephraim K. Hanks' Narrative,” Pioneer Overland Travel [http://history.lds.org/overlandtravels/trailExcerptMulti?lang=eng&sourceId=97569 : accessed 30 July 2014]; citing Andrew Jenson, “Church Emigration,” Contributor, 14 (Mar. 1893): 202-5.)

Christensen said that Ephraim’s whole life had prepared him for that moment. “Great things can happen when opportunity meets preparation,” Christensen said. Those moments can happen in our own lives. Ephraim did great things, even though he knew he was not a perfect man, just as we are not perfect. Yet he said, “I try.”

In paying tribute to those who suffered so much in the Willie and Martin handcart companies, Christensen asked their descendants, and the descendants of the rescuers, to stand. I think about a fourth to a third of us stood. He said that that happens even far away from Utah, in places like Massachusetts and Honolulu. He said that their faith has seemed to sink deeply into their souls, the souls of their children, and their children’s children. “We still benefit from these people who survived such hard things.”

I thought of my own ancestor, Elizabeth Robinson. It’s true. I still benefit from my knowledge that members of my family have, and still can, survive hard things.