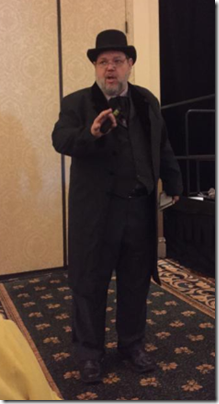 Credit: Shannon C Bennett
It was a great day yesterday at the 2015 annual conference of the National Genealogical Society. J. Mark Lowe got the conference off to a great start. He spoke in period costume, telling stories from the point of view of several characters, such as Daniel Boone. Dear MYRT reminds me that another character was Charles Floyd of the Lewis and Clark company. He showed several paintings while he spoke, drawing a story or theme from each one. Louis, the Eagle capped off his presentation.

Between other duties, I got to attend two regular sessions.

Peggy Baldwin gave a presentation about the Oregon Trail. You could tell she was passionate and knowledge about the subject. She did the Oregon Trail portion of the research for the Kelsey Grammer episode of WDYTYA and shared some clips with us, albeit without sound. It was not for lack of trying. I found her in the room 30 minutes early to get set up. Slide show and sound were working until it was time to begin. Then the technical gremlins took over! 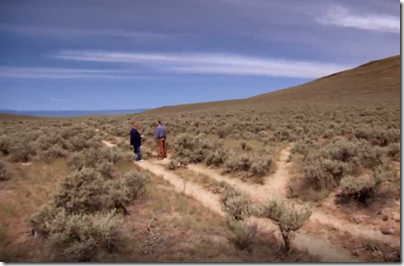 I attended a class by Elizabeth Shown Mills. She had put together a whopper of a document—two actually—illustrating the kinds of things we have to know to decipher a document, accurately and completely. Laws, practices, geographies, jurisdictions, contemporary word definitions, and common sense. “I see what it says. But, what does it mean?!!” She taught us a lot. Genealogy is a great hobby if you like to learn and a dangerous one if you don’t!

Lunch with speaker Judy Russell. Shed a tear or two. Dinner barbeque buffet with the St. Louis Genealogical Society. They are awesome hosts.

I’m off to bed… Stay tuned for tomorrow…