Thursday at #NGS2015GEN, Thinking of Dad

I’ve just completed Thursday at the 2015 annual conference of the National Genealogical Society (NGS). I’ve expended 99% of my energies and the conference is only 50% complete! Oh, oh.

In the morning I learned about a couple of libraries here in the Midwest. 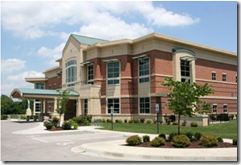 Cheryl Lang introduced the Midwest Genealogy Center of the Mid-Continental Public Library. It bills itself as the largest free-standing public genealogy library in the United States. It has 52,000 square feet, welcomes 10,000 visitors a month, has 200,000 print volumes (I think 20,000 of them can circulate), and sports 2,000 periodical titles.

I think it was Barbara Renick who, years ago, taught me that when visiting libraries in far off places, one might want to acquire a library card so that you can continue to access their online databases when you return home. Many libraries require that you be present to obtain your card, but let you renew from a distance. Some are free. You’ll want to look into the cost and benefits of obtaining a card when visiting libraries away from home. The rules and costs for obtaining a library card at the Midwestern Genealogy Center confused me a bit. (If you live in such-and-such counties, except for this school district, or if your Kansas City library has a borrowing agreement with us, or if you own land in such-and-such places, or if you live outside Missouri or Kansas and obtained your current card before May 2010…) Their website offers some help. If I understand correctly, any citizen of the United States living in the United States can get a Research Card. It provides access to most of their online databases (Ancestry Library Edition and Fold3 Library Edition being the notable, albeit usual, exceptions). It must be obtained in person, costs $20, and expires in six months.

The Midwest Genealogy Center has a partnership with FamilySearch, allowing FamilySearch to digitize books which have passed into the public domain. (That is to say, their copyright has expired.) FamilySearch missionaries are working eight hours a day, five days a week in this endeavor. (Go, missionaries!) Thank you, Midwest for allowing this. Midwest has donated 4,000 volumes so far. Midwest also has a partnership with Ancestry.com. Ancestry spent two to three years digitizing their yearbook collection.

For more information about the Midwest Genealogy Center of the Mid-Continental Public Library, visit their website.

Larry Franke introduced the History and Genealogy Department of the St. Louis County Library. They used to answer the phone saying “Special Collections.” People would ask to be transferred to the genealogy department. They got tired of explaining that that is basically who they were, so they changed their name.

Their most well-known collection to national genealogists is the NGS book collection. Twenty-thousand books arrived from NGS in two tractor trailers. Accessioning the collection was monumental, partly because NGS used the LC numbering system and St. Louis uses Dewey and partly because of the sheer size. The St. Louis Genealogical Society came to the rescue (go StLGS!), providing many hours of labor. The size of the collection has grown to 30,000 items, as authors donate additional titles to NGS. One stipulation of the donation to St. Louis was that the books be available for circulation. To learn how you can check out titles via interlibrary loan, watch “NGS Book Loan Collection” in the FamilySearch Learning center.

They will make copies of items from some of their vital records microfilms. If you request specifically, and receive the copy electronically, they will provide the service at no charge. See a list of their microfilms. Send requests to genealogy@slcl.org.

I was able to attend a couple of classes from the New York track sponsored by the New York Genealogical and Biographical Society (NYG&B). I’m afraid I’m out of time, so I can’t tell you much about them. Remember that “towns” are not like towns out here in the west. Karen Mauer Jones likened them to western townships. For me, a Utahan, a township is a very large square of land without a known name. That’s not what a New York (or New England) town is like. For me, I think of what would happen if a group of western towns all expanded until they entirely consumed all the land in a county. Driving across New England it hit me one day: there’s no space between the towns. The other difference is record keeping. So many records are created at the town level instead of the county level, maybe I should think of towns as mini-counties—counties within a county. Jane Wilcox drove home the need to understand the place hierarchy and its effect on records by pointing out that New York has 1,472 government bodies with the potential of creating or holding vital records. That’s 22% of all that are in the United States. And they are all in New York. And records that you think ought to be archived at one level are sometimes found at another. It was easy to see why both Karen and Jane recommended NYG&B’s new book, the New York Family History Research Guide and Gazetteer.

Lunch was cool. In her luncheon presentation, Terry Koch-Bostic mentioned my Serendipity in Genealogy series! Thanks, Terry! Terry is such an awesome person, it was a great honor to have her mention me. I see Terry in action on a regular basis and, honestly, I don’t know how she accomplishes all she does for so many organizations and so many people in so short a time. (Go, Terry!)

Terry’s topic was “Intuition and Genealogy Success: A Sixth Sense, Chance, Coincidence, or Serendipity?” She told several touching stories. One rang especially true to me. She told a story in which a white dove brought her and her mother closer to her deceased father. I shed a tear because the exact same thing happened to me and my mother. But you have to understand my father’s humor and playful nature to understand my story. And you have to understand that in his final years, Dad had become an avid bird watcher. Terry experienced a solitary, noble, white dove. My mother and I were walking to a place we often frequented with my father before his passing. It was, perhaps, the first time we had done so. We were weeping a little over that very fact when we were buzzed by an exceptionally low-flying flock of mallards. They quickly settled at our feet onto a newly landscaped, lovely pond. Tears and sadness were startled away with surprise and amusement. It was the perfect mixture of humor and love. It was Dad.