There were two stories released last week that did not show AncestryDNA in a positive light.

On 1 May 2015, the Electronic Frontier Foundation published an article recalling an old news story published back in March. And while this is old news, I didn’t write about it back then, so let me do so now. The New Orleans Advocate published a story titled “New Orleans Filmmaker Cleared in Cold-Case Murder; False Positive Highlights Limitations of Familial DNA Searching.” That’s a mouthful, unlike the cheek swap police gave Michael Usry.

Idaho Falls police were investigating a murder. They searched the Y-DNA database of the Sorenson Molecular Genealogy Foundation for a match to DNA found at the scene of the murder. 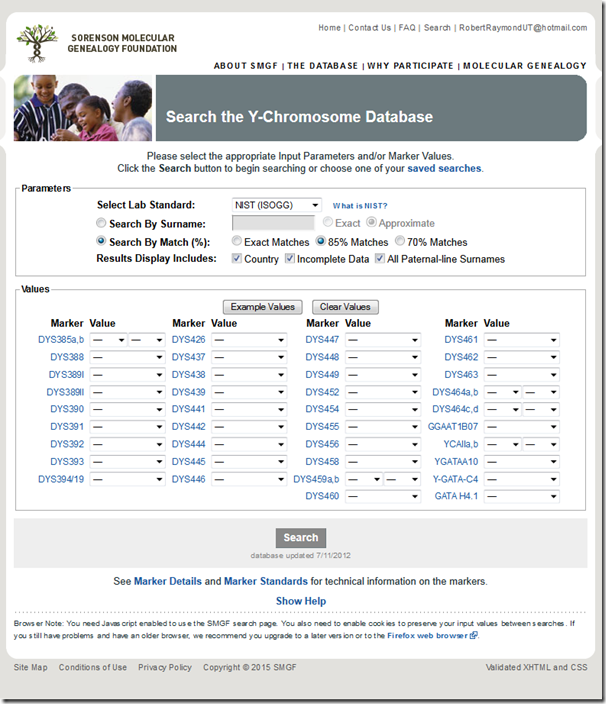 They obtained a court order requiring Ancestry.com, the current owner of the Sorenson database, to identify the subject of the test sample. That eventually led them to Michael Usry. Last December Idaho Falls police showed up at his door with a court order and a cheek swab. In January, he received word that he was not a match to the DNA found at the crime scene. But it was a nerve racking ordeal.

I’ll let you read the article for the complete story. It quotes our own Judy G. Russell, the Legal Genealogist, who expresses concern about the implications of this story. See her complete take, “Big Easy DNA: Not So Easy,” on her blog.

Let me offer one clarification to the story. I’m doubtful that the Church of Jesus Christ of Latter-day Saints, called the Mormon Church in the article, sponsored a project to give DNA samples to Sorenson Molecular Genealogy Foundation. To be sure, there are numerous connections between the two. Sorenson Molecular was founded and financed by wealthy Church member, James L. Sorenson. It was started at Brigham Young University, which is owned by the Church. It was the subject of a news story in the Church News, an official publication of the Church. (See “Unlocking DNA.” The article states that “The foundation has no connection with the Church.”) I gave my sample to Sorenson at a meeting of a local genealogical society held monthly inside one of the Church’s buildings. Maybe there was support of Sorenson’s project by individual Church leaders, but it sounds uncharacteristic for the Church to have officially sponsored this project.

Let me return now to the May Day article resurrecting this story, “How Private DNA Data Led Idaho Cops on a Wild Goose Chase and Linked an Innocent Man to a 20-year-old Murder Case.” The article shouts “May Day! May Day!” over possible privacy issues surrounding DNA databases. This article contains additional detail not found in the Advocate article. I assume they did further research, including talking to Usry. But it also makes claims at odds with the Advocate article. Judy Russell addresses these discrepancies in her article, “Facts matter!”

To be sure, there are privacy concerns. I’d like to see them addressed. I’m still upset that Ancestry.com was able to buy my DNA sample from Sorenson. But it doesn’t constructively further the discussion to play loose with the facts.

The second negative story concerning AncestryDNA concerns its spit-test alternative to cheek swabs. Reuters ran a one paragraph story saying that Ancestry.com is being sued by DNA Genotek, a provider of DNA test kits. They allege that Ancestry.com reverse-engineered their test kits and created ones of their own, all this in breach of the agreements between the two. Reuters invites readers to read the complete story on their subscription website.

Those charges are nothing to spit at.