Searching for Sources at FamilySearch at #NGS2015GEN (Part 1) 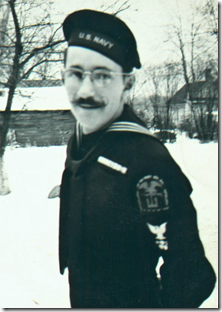 FamilySearch’s Robert Kehrer, search product manager, presented a luncheon session at the 2015 annual conference of the National Genealogical Society. It was titled “FamilySearch Hinting: Making Difficult Research Easy.” Like Ancestry.com shaky leaf record hints in personal member trees, FamilySearch’s record hints are indicators in Family Tree that a record exists that might pertain to a person in the tree.

[Since we are days past the conference, I must worn again that my recollections fail me. Some of the information below comes directly from my notes. Some are interpolations.] 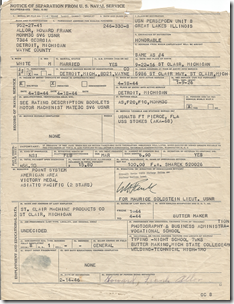 Robert found his grandfather’s naval discharge paper and uploaded it to FamilySearch.org. To add a document, click on Memories, then Add Document, and then drag and drop the file. Robert didn’t show it, but a document can also be attached to a source in the Sources section of the person page. As this document contains strong evidence regarding an event in Howard’s life, I would do so. The evidence of birth is weaker, but I would still tag it as a source for the birth information.

From the discharge papers, Robert learned that his grandfather had served on the USS Stokes, so he searched the web and found a website dedicated to the Stokes.

On the website, Robert found a photo of the crew during the commissioning ceremony. Because a crew list showed his grandfather was present, and because of his grandfather’s glasses and moustache, he was able to locate him in the photo! He downloaded it and uploaded it to FamilySearch.org. 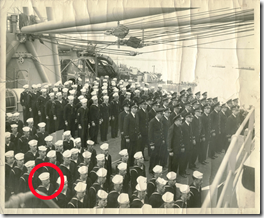 I thought it would have been interesting if he had created a source for the commissioning photo. Having seen a couple of misidentified photographs in Family Tree, I am increasingly aware of the need to specify the provenance of historical photos. Robert has a high confidence in the photo because he knows the provenance. But how can other people judge? A source and citation would go a long way. Your citation might look different than mine and still be just fine, but I would have tinkered with a citation looking a bit like this one:

If I knew something about George R. Carver, I might add that. Was he there? Was he an official who would have known the subject of the photograph? (But I digress…)
A source can be created through searching a record. FamilySearch.org has records containing about 5.2 billion names. The records are very heavily weighted towards civil (vital) records, church records, and census records—records that help bridge the generations. One way to begin a search is by clicking Search Records on the person page: 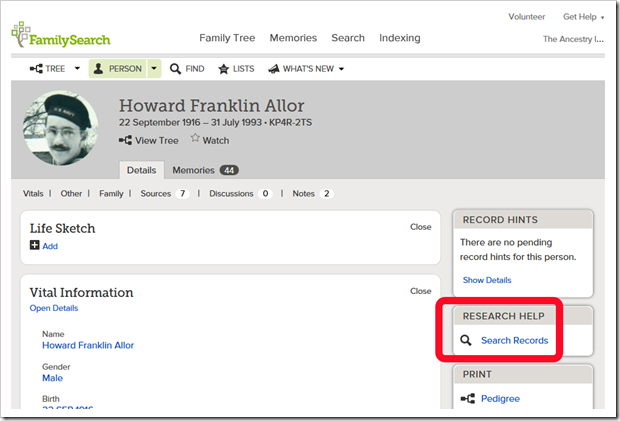 FamilySearch.org starts a search, using the name, birthplace, and a birth year range of two years on either side of the birth year. (See the left side of the screen shot, below.) 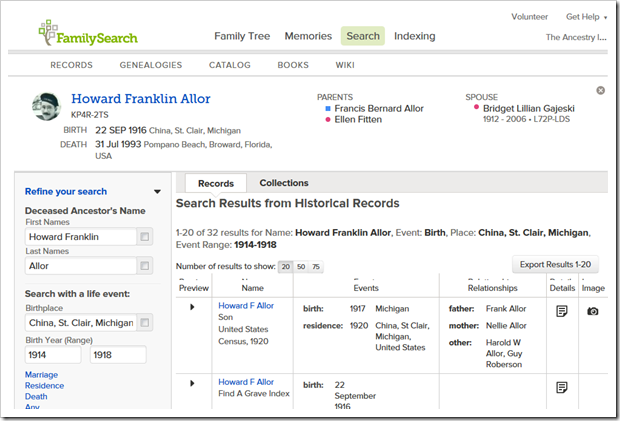 Notice the difference between starting a search from an Ancestry Member Tree and FamilySearch Family Tree. Ancestry.com loads the search with every known fact about the person, including names of some relatives. FamilySearch is nearly the opposite, specifying just birth information. The result will become apparent in part 2 of this article.

Click on a result and review it. If it pertains to your search subject, click the big blue button on the right hand side labeled “Attach to Family Tree.” 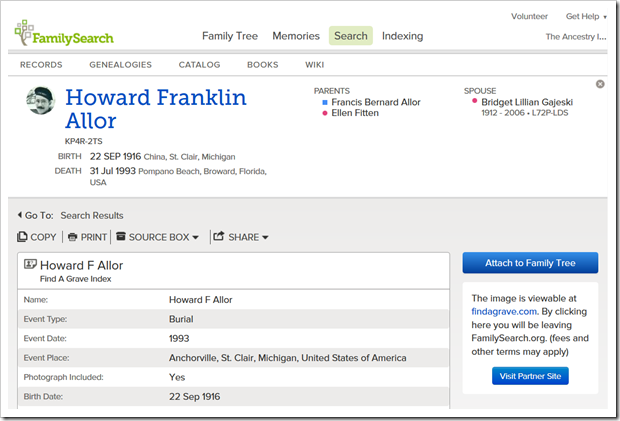 Next time I’ll talk about number four on the list of ways to create a source: hinting.