We are Binding Families in Love and Service – #BYUFHGC

The opening keynote of the 2015 BYU Conference on Family History and Genealogy was decidedly orientated to members of the Church of Jesus Christ of Latter-day Saints. It might help others understand why the Church sponsors FamilySearch, but if that is of no interest to you, feel free to skip this article. 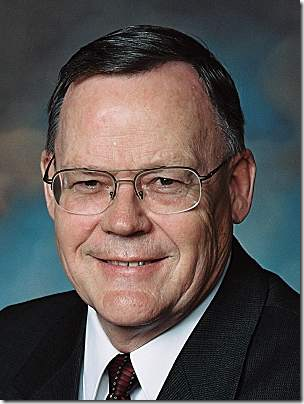 “The doctrine of turning hearts of fathers and children, I believe, is about creating eternal families whose hearts are bound together in love and service to each other,” said Elder Gerald N. Lund. “The keywords for me are love and service.” Elder Lund presented the opening keynote at the 2015 BYU Conference on Family History and Genealogy. He titled his presentation “They Are Not Dead, Only Living Somewhere Else.”

Elder Lund is an emeritus member of the Second Quorum of the Seventy of the Church of Jesus Christ of Latter-day Saints. He is also the author of more than 25 books of both fiction and nonfiction. He is best known for his historical novels, including two well–known series, The Work and the Glory and The Kingdom and the Crown.

Elder Lund told us that he was not a genealogist. He said he felt like the burro enrolled in the Kentucky Derby. Someone observed to his owner, “You know he has no chance against all those thoroughbreds?”

“Oh, I know that. He knows it too. He just likes to lather up with the best.”

While we usually think about our service to our ancestors—through temple work on their behalf—we don’t always think about their service to us. Elder Lund quoted President Joseph F. Smith, who said,

Surely those who have passed beyond, can see more clearly through the veil back here to us than it is possible for us to see to them.…I believe we move and have our being in the presence of…heavenly beings.…We can not forget them; we do not cease to love them; we always hold them in our hearts, in memory, and thus we are associated and united to them by ties that we can not break, that we cannot dissolve or free ourselves from.

If this is the case with us in our finite condition, surrounded by our mortal weaknesses, short-sightedness, lack of inspiration and wisdom from time to time, how much more certain it is and reasonable and consistent to believe that those who have been faithful, who have gone beyond…can see us better than we can see them; that they know us better than we know them.

I claim that we live in their presence, they see us, they are solicitous for our welfare, they love us now more than ever. For now they see the dangers that beset us; they can comprehend better than ever before, the weaknesses that are liable to mislead us into dark and forbidden paths. They see the temptations and the evils that beset us in life and the proneness of mortal beings to yield to temptation and to wrong doing; hence their solicitude for us and their love for us and their desire for our well being must be greater than that which we feel for ourselves.1

“Isn’t that a wonderful concept of service?” asked Elder Lund.

He quoted again from President Smith:

We are told by the Prophet Joseph Smith, that “there are no angels who minister to this earth but those who do belong or have belonged to it.” Hence, when messengers are sent to minister to the inhabitants of this earth, they are not strangers, but from the ranks of our kindred, friends, and fellow beings.…Our fathers and mothers, brothers, sisters and friends who have passed away from this earth, having been faithful,…may have a mission given them to visit their relatives and friends upon the earth again, bringing from the divine Presence messages of love, of warning, or reproof and instruction to those whom they had learned to love in the flesh.2

These are angels providing service to the living, Elder Lund said.

At the conclusion of his presentation, Elder Lund reiterated his definition of turning hearts. We are binding families together with love and service so that they can be together forever.