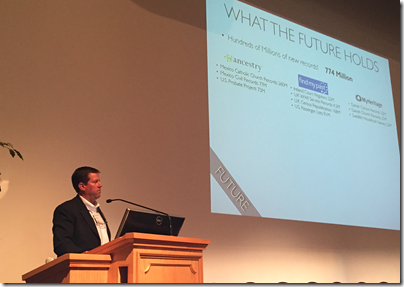 “I’m here to talk about transformation,” said Robert Kehrer. In his three careers, Robert Kehrer has had a front-row seat to three exciting transformations. Robert Kehrer, senior product manager at FamilySearch, gave the Wednesday keynote at the 2015 BYU Conference on Family History and Genealogy. His presentation was titled “FamilySearch: Past, Present & Future.”

Robert’s first career was as a molecular geneticist. It was at an exciting time when sequencing the human genome was underway. Genetics have since transformed the landscape, including that of genealogy. He next went to Apple at a time when they were down trodden and beleaguered. Since that time Apple has transformed the laptop, smart phone, tablet, music industries and more.

“It was fun to have a front row seat in the beginning of that transformation,” Robert said.

“I came to FamilySearch eight years ago,” he said. “I have witnessed a fundamental change.” FamilySearch had decent product offerings back then, but there were limitations and problems. It was not genealogically sound as it was not source-centric, he said. The offerings weren’t great.

“Today it is fundamentally different,” he said. And one sign of the transformation is the increase in visitors to FamilySearch.org. Traffic has increased 1,035%.

Robert highlighted past and future transformations at FamilySearch in several areas:

I was thrilled when he showed the Ancestry Insider’s graph of microfilm growth. (For the original, see “Vault Vednesday: Food, Film, and Family History Centers.”) 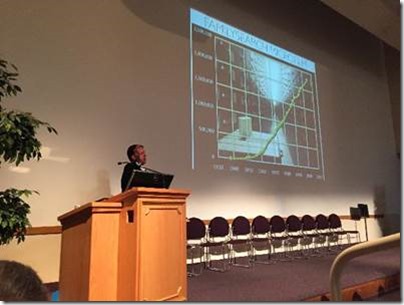 FamilySearch has cameras all across the world capturing records digitally, as indicated by a color-coded map of the world. Darker means more cameras. 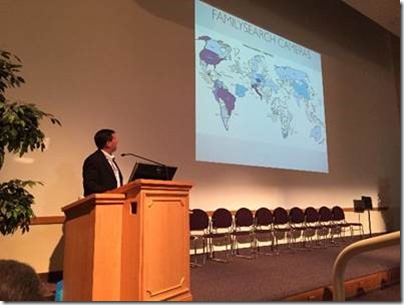 The record types digitized by FamilySearch in 2014 were predominantly those with the most genealogical value. Civil and church vital records and census records accounted for 61% of the records. Because of their focus on digitizing the records of greatest value, FamilySearch really has the deepest set of genealogically rich and valuable records. 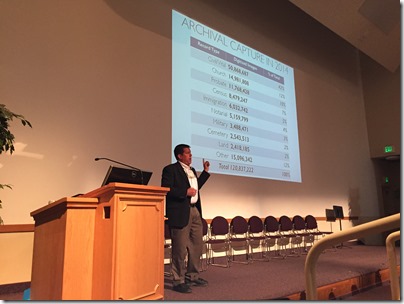 (Click to enlarge the chart of record types and percentages.)

FamilySearch has a number of record related goals for 2015. They plan to digitize and index more records with affiliates. They wish to digitize key vault records, concentrating on those with the best value from the Americas, Europe, Africa, and Asia. They wish to create fielded indexes of names, dates, places, and relationships in family histories and obituaries. Their goal is to ramp up non-English indexing, especially in Spanish, Portuguese, Italian, French, and German. They are trying to increase to 300 cameras capturing records, with major growth targeted for Europe, Latin America, and Africa. The goal is to digitize over 150 million images this year. 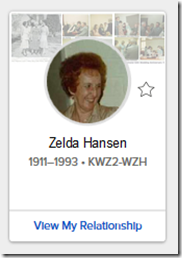 The People page now  defaults to showing artifacts submitted both by yourself and others, “making this a page of discovery.” Behind each person’s portrait are thumbnails indicating there is more to see beyond this page. FamilySearch displays the lifespan underneath the person’s name. Further down is a link to view your relationship with the person.

“We’re redoing some of the pages and we’re really excited about it,” Robert said. The artifact page displays in grid view today. In the future, there will be a list view that looks like iTunes.

Robert said when he first came to FamilySearch he realized something. They had two contributor doors through which you could walk through: indexing or genealogical researcher. Only about 3% of the public have the desire to be a great researcher and indexing was the only other alternative. Today, FamilySearch has a lot of other contribution channels. Robert quoted Elder Dallin H. Oaks from the June 1989 Ensign article titled “Family History: ‘In Wisdom and Order.’ ” Elder Oaks said, “Our effort is not to compel everyone to do everything, but to encourage everyone to do something.” Today there are lots of ways for people to get engaged. You can grab an iPhone and record an interview or photograph a document. You can use the source attachment tool without being an expert genealogist. FamilySearch is seeing an increased participation in family history, Robert said.

Indexing has gone through transformations and is set to undergo more.

The current indexing system requires a Java download and is not compatible with mobile devices. FamilySearch will roll out a new indexing system over the next several months that runs as a web app in most browsers on most devices. No download is required. I’ve reviewed many of the expected features previously. (See “#RootsTech – New FamilySearch Indexing Program.”) Among other things, Robert briefly mentioned better collaboration, better reporting, and a messaging system.

An examination of the numbers shows a disparity between the number of records digitized and the number of records published. Indexing is not keeping up with acquisition. A lot is going on behind the scenes to address this. One approach is to automate indexing, or robo-keying as some call it at FamilySearch. They have a lot of smart people working on this. Robert showed an example of an obituary color coded to show what a computer had identified as people, places, dates, and relationships. 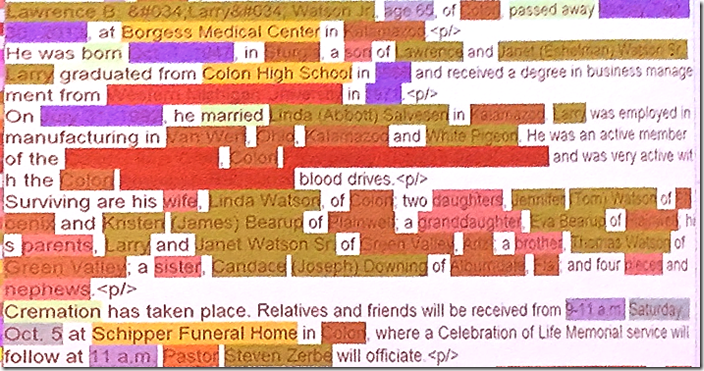 This breakthrough is being used today to help index the “United States, GenealogyBank Obituaries” collection. (FamilySearch recently announced they were adding an astonishing 47 million records to the existing 16 million records. I wondered if automation was being used to progress so quickly.)

Automated indexing produces some errors. For example, Billie Jean is not Michael Jackson’s sibling. The record detail page indicates automatically indexed records and allows users to specify corrections so that FamilySearch can better tune the system. 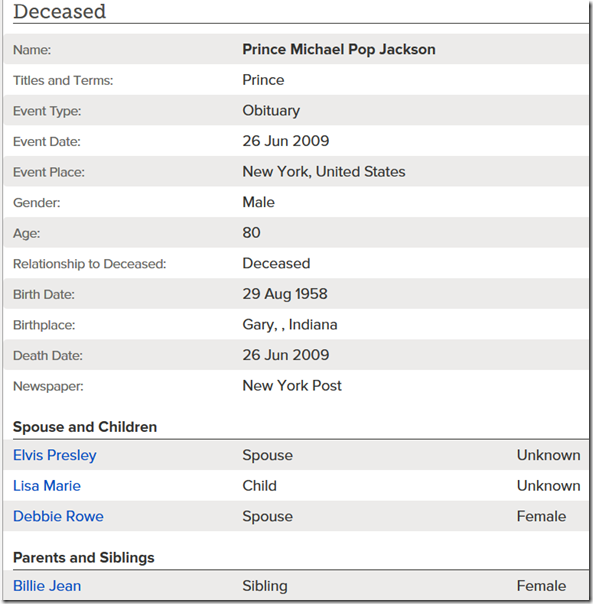 Robert announced “Fuel the Find,” a FamilySearch worldwide indexing event. It is a weeklong event this year, 7-14 August. The goal is to have 100,000 volunteers index at least one batch during the week. To learn more, visit familysearch.org/indexingevent2015.

FamilySearch has made great transformations in its search capabilities.

Robert gave a tour of the historical record search capabilities. I’ve written about much of it in the past. (See, for example, “Searching for Sources at FamilySearch at #NGS2015GEN (Part 1)” and part 2. There’s probably more I could write about the country specific search pages, but I will save that for another day.

FamilySearch’s hinting system is really good. About 98% of the hints are correct and 65-70% of records about a known person are surfaced through hinting. (Robert calls this latter measurement hinting recall.) Each day a quarter-million hints are added to the tree.

Robert showed the new image viewer. It displays a grid below the image showing the persons and some of the information indexed from that image. He said that the deficiencies exhibited by the new image viewer, such as lack of image-to-image navigation, are coming in the next month or two. He felt the power of the page was worth releasing even though all the features were not yet present. Click “Open in a new window” to revert to the old image viewer. To close the viewer and return to the record details, click the X in the upper-right corner or click somewhere off the image. You can also go to the record detail page of someone else on that image by clicking their name in the list at the bottom and clicking the record icon to the left of their name. This feature elicited applause from the audience.

At this point, Robert was overtime and whipping through his presentation. He alluded to coming features that will allow users to click an icon next to a film number in the catalog and see the images from that microfilm! That drew even greater applause. “We think that what we’re going to deliver will be more functional than cranking a microfilm reel,” he said.

The BYU Conference on Family History and Genealogy continues through Friday and you can still register, get the entire syllabus on flash drive, and attend the remainder of the conference.