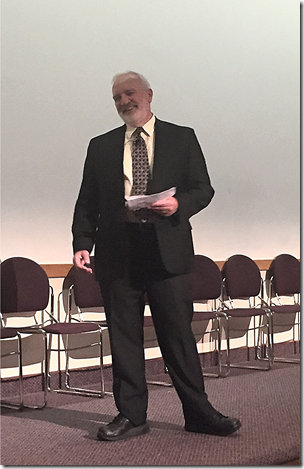 “It’s the stories that we remember,” Paul Milner said. Paul delivered the Thursday keynote at the 2016 BYU Conference on Family History and Genealogy. Paul is a native of England and a noted expert on British Isles research. He has authored six books on English and Scottish research.

Paul began by quoting from the novel Birdsong, by Sebastian Faulks. One of the characters, Elizabeth Benson, was driving through the French countryside, trying to comprehend World War I. As she drove she saw something odd.

Through the fields to her right Elizabeth saw a peculiar, ugly arch that sat among the crops and woods. … it was made of brick or stone on a monumental scale. It was as though the Pantheon or the Arc de Triomphe had been dumped in a meadow.

She entered the huge structure and was struck to find that every surface was chiseled with names. She asked a man there who they were.

“These?” The man with the brush sounded surprised. “The lost.”

“Men who died in this battle?”

“No. The lost, the ones they did not find. The others are in the cemeteries.”

She looked at the vault above her head and then around in panic at the endless writing. … When she could speak again she said, “From the whole war?” The man shook his head. “Just these fields.” 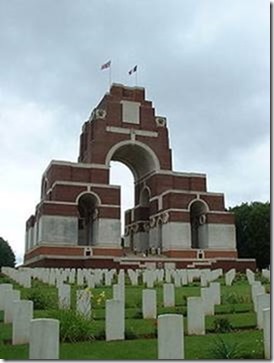 The Thiepval Memorial names 72,000 men of the British Empire who died in the Battle of Somme whose remains were never identified.

“Why does it matter to me?” Paul asked. “Corporal Robert Finnegan, my mother’s uncle’s name is listed on that monument.” Paul related the story of the first day of the battle. It began 100 years ago on 1 July 1916. The battle resulted in the death of two of his granduncles. (See Paul’s blog article, “Remembering those who died on the First Day of the Battle of the Somme – 1 July 1916.”)

Paul encouraged us to find the soldiers on our trees.

“We all have stories to tell. They don’t have to be big and fancy,” he said.

Paul told us the story of his first 4th of July celebration in this country. (“That’s not a holiday I would normally be celebrating,” he joked.) It had snowed the day before. We all have family celebrations and traditions. Have we told those stories?

Paul told the story of how a northern English lad ended up living in America. “Have you told your children why you came to this place?”

Paul related his long faith journey. “Part of your mandate [as members of The Church of Jesus Christ of Latter-day Saints] is to find out about your ancestors. But do you tell your faith story as well?”

You all have stories and the Church is making it easy for you to tell those stories, he said.