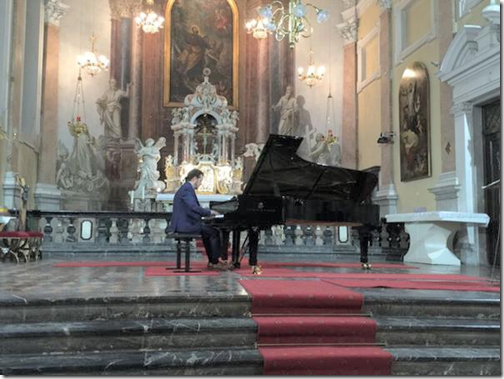 Credit: Ivan Majc, Adriatic North Mission
“As you talk about the ancestors, that is where the love is,” said Paul Cardall. “That is where the heart starts to turn.” Paul has learned this through multiple visits to Slovenia, the homeland of his wife’s family.

The 2016 BYU Conference on Family History and Genealogy opened this morning, Tuesday, 26 July 2016, with a keynote address by Paul Cardall, a pianist known for his hymn instrumentals.

“Literally, seven years ago I had a change of heart,” said Paul. That’s when Paul, who had suffered all his life from a congenital heart defect, received a transplanted heart.

After marrying Tina, a Slovenian-American, his heart turned to her ancestors. Paul talked to his wife about her family, but she only knew so much. Tina’s grandfather (I think it was her grandfather) was a freedom fighter during World War II, so he was forced to flee to the United States after the war. After scouring FamilySearch.org and subscription sites like Ancestry.com, Paul found there were no records online. He asked a friend, FamilySearch’s Suzanne Russo Adams, what to do. Suzanne connected him with Lidija Sambunjak, an expert in Slovenian genealogy. She informed him that, unfortunately, a lot of the Slovenian records are available nowhere else but in Slovenia.

When invited by Brigham Young University to write music about a documentary about the history of The Church of Jesus Christ of Latter-day Saints in Yugoslavia, he joked that he would love to do it if they would fly him to Slovenia.

He was delighted when he received a call from the Adriatic North Mission of the Church of Jesus Christ of Latter-day Saints inviting him to come and perform for church members in Slovenia. His wife was excited to accompany him and, being Catholic, asked why they couldn’t perform in a Catholic church. They asked and Father Jože Kokalj in Ljubljana agreed to host the concert at St. James Church.

At the same time, they reached out to the Slovenian Heart Foundation, an organization that helps children with heart defects. What had begun as a Mormon event was becoming something much bigger.

“All of this was happening as I was doing genealogy,” Paul said. Tina was not certain they would see any of her family, but when they arrived at the airport, they found many cousins waiting. Their hearts were turning.

Paul played for us the first several phrases of the opening number from the concert. (Listen to the song on Facebook.) At the concert family showed up that they didn’t know they had. “Just to be there and to feel the love of everyone [was amazing],” Paul said. “Just to be there with these people was wonderful.”

Six months later Paul and Tina were on their way back to Slovenia for the Slovenian Heart Foundation's 25th anniversary charity concert. The Adriatic North Mission wanted two artists this time, so they invited David Archuleta to perform with Paul. This time he would perform in the Slovenian Opera Theatre and Ljubljana Archbishop Msgr. Stanislav Zore would attend.

Tina’s mother had declined going on the first trip because of lingering fears over the communist past. This time she wanted to come. She was able to visit her village for the first time in 43 years. They went to her own house and found cousins living there. She met family members she hadn’t seen in 43 years. “War tears families apart,” Paul said. “You [genealogists] help put the puzzle back together.”

They visited the archive where the parish registers are kept. Tina’s mother got to see the names of her ancestors. “These books are old,” Paul said. “They are older than the constitution of the United States.” Each book is the record of a parish for a couple of hundred years. “Each priest carefully wrote down the names, one by one. It is so powerful.” Paul told us that we, genealogists, understand. We also add the names, one-by-one, into “the book of life.”

I haven’t mentioned much of it, but religion was a big part of Paul’s presentation: His love for his wife’s church, the Catholic Church. His love for his church, The Church of Jesus Christ of Latter-day Saints. His love for the Savior. He finished his presentation by playing a recording of a new hymn. Elder David A Bednar, an apostle of The Church of Jesus Christ of Latter-Day Saints, and a grandson of Hungarian immigrants, asked Paul to help him write a song titled “One by One.” Paul played a recording of it for us. (Listen to it, read the lyrics, or print the sheet music at https://www.lds.org/new-era/2016/07/one-by-one.)