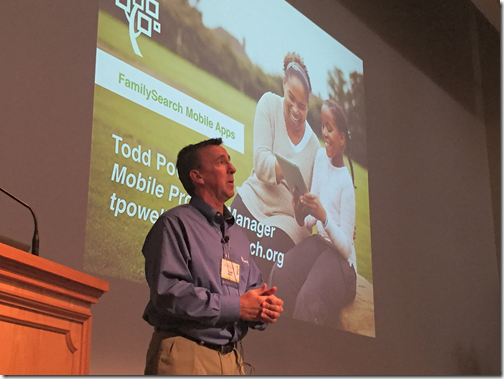 Todd assigned us homework. Our first assignment was to go install the app. Check. I’ve done that. It is supported by Android or Apple in the Google Play Store or the Apple App Store. Our second assignment was take something that we learned today and teach it to someone else. With this article I’m putting a check in that box also.

There are two apps, Family Tree and Memories. FamilySearch makes a new release every two weeks (with rare exceptions). New releases were made the week before the conference. New releases will be made the week after the conference. Make certain you are getting updates. They are releasing new features all the time. The version number can be found on the setup screen. [I don’t think you need to check it. At least on iOS the app prompts me when I need to update. It also shows up on the list of apps needing to be updated.]

For the year ending 31 January 2015, 2 million sources have been attached using the app, 1.2 million persons added, and 9 million photos viewed. There have been 300,000 people who have created new FamilySearch accounts. About 100,000 people use the app each week.

Todd said that using the mobile app engages young people better than using a computer. If you have the chance to work with them, have them go out four or five generations. Take 10 to 15 minutes to find a photo or story they haven’t seen before.

If you prefer a typed story over recorded audio, rather than trying to type on the little keyboard, dictate the story. Use the microphone key on the phone keyboard. If you speak slowly and clearly, the phone does a good job of converting your speech to text.

To give you ideas of questions to ask an older relative, FamilySearch will soon release a feature that has suggested questions. They have just started working on this today, for release a couple of weeks out. Tap the question and it begins an audio recording using the question as a title.

Today you can use the app to search FamilySearch records. In the future they will add the ability to search Ancestry.com.

On the mobile app, you can see JPEG and PNG, but not PDF. They don’t separate photos and documents.

The system will not allow the same, exact photograph file to be uploaded multiple times. But if there are differences, even if it is the same original photo, the program will let you upload a duplicate.

The “Descendants with Tasks” screen will show icon tasks for three generations of descendants of the focus person. This works for record hints and temple opportunities but does not include research suggestions or data problems.

The “Ancestors with Tasks” is the killer feature of the app. Tap and the app lists persons with tasks for your ancestors, up through five generations, plus their children and spouses. It also checks anyone you visit in the mobile app. The first time you run this report, it takes a while because it downloads the list to your device. Subsequent runs will be faster.

This week on iOS you will see a new map feature. From a person view, you tap on a map icon next to a location, such as birthplace. The map will show pins for the locations of the events associated with that person.

The mobile app has become complete enough that you can do 85% of the top 100 tasks that you do on the web. What can’t you do?

· See data problems and research suggestions (they will add these)

· Traditional, horizontal pedigree (they won’t change this as they like what they have)