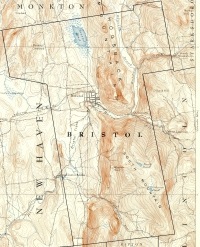 Have you ever used historic United States Geological Survey (USGS) maps? I love maps anyway, but I think historic maps give me a better understanding of the environments my ancestors lived in.

Were I to do a doctorate in genealogical studies, I think my dissertation would be a comparison of historic migration routes and turn of the 20th century roads. My theory is that the further back in time one goes, the more our road system reflects the actual pathways used in earliest times. I figure just before the invention of the automobile... But I digress...

While current USGS maps are easy to obtain, historic USGS maps are not. Christopher Marshall, a railroad enthusiast in New Hampshire found this to be the case and started traveling around the state, digitizing USGS maps. Marshall's collection grew into the University of New Hampshire's (UNH) Dimond Library Government Documents Department Historic USGS Maps collection. First with statewide coverage, coverage grew until it covered all New England. New York came next.

By this time Marshall's Collection was extending beyond UNH's New England focus, and Marshall was looking for a new home. Through a fellow rail enthusiast, Marshall learned of Maptech, which agreed to host the growing Marshall Historical Maps Collection. Access the collection at

The online collection now includes over 2000 USGS topographic maps and has complete geographical coverage of New England, New York, Pennsylvania, New Jersey, Delaware and Maryland from the 1890s to the 1950s. Much of Virginia, West Virginia and Ohio are covered. It is slowly being expanded as time permits through volunteer efforts. If you would like to help, contact Chris Marshall through Maptech's e-mail address: sales@maptech.com.

Positions on the Earth are measured using latitude and longitude. Latitude is measured in degrees from 0 to 180 degrees east or west of London, England. Longitude is also measured in degrees from 0 to 90 degrees north or south of the equator. Can you see that in both cases, 360 degrees makes a complete circle around the Earth? And in both cases, smaller distances are measured by subdividing one degree into 60 minutes.

This extract shows the detail
level of a 7.5 minute series map.

USGS maps cover a particular rectangle of the Earth's surface, or since the Earth isn't flat, it is more correctly called a quadrangle. Quadrangles are aligned by degree or fractions of a degree, sometimes cutting cities or other features of interest onto different maps. For example, Manchester, New Hampshire is cut up onto 4 different maps!

Each quadrangle was named by the USGS, generally from some significant feature within the quadrangle. Names are only unique within the state and map series. For example, both Vermont and Massachusetts have a Barre quadrangle. Sometimes the names were changed when new editions were created.

The series of maps that covered a 7.5 by 7.5 minute quadrangle are called 7.5 minute series maps. These are the most recent and the most detailed maps in the Marshall Collection. Most of the 7.5 minute maps in the collection are of southern New England and were published in the late 1930s until the mid 1950s.

Contrast the detail in this 15 minute series
example, which has been enlarged to match
the size of the 7.5 example. Ignore growth
in human features. Notice swamps,
contour lines and waterways.

The Marshall Collection contains complete coverage of New England in this series. The 15 minute series includes the oldest maps in the collection. The south was complete by 1900, but parts of Vermont and New Hampshire weren't complete until the 1920s and parts of Maine were later than that.

The maps in this series are the oldest and least detailed in the Marshall Collection. Very few appear to exist, as the USGS seems to have switched to publishing 15 minute maps around 1900.

Each state in the Marshall Collection includes an Image Map that shows the state divided into rectangles (er... quadrangles). Click on a quadrangle to link to a web page that lists available maps for that area of the state.

The collection also supplies an index by quadrangle name.  Since cities don't have dedicated quadrangles, the quad index is pretty useless for the casual user. A town index is supplied for each state to make it easier to locate towns/townships.