It has been a little while and I owe you (IOU) an update on the rollout of New FamilySearch (NFS) to members of the Church of Jesus Christ of Latter-day Saints. Since our last update, the following has occurred:

As always, all the latest information can be found at “Temple Districts Using New FamilySearch.” Keep everyone informed by sharing your news at AncestryInsider@gmail.com .

IOUSs (individuals of unusual size) is the term used to describe the software glitch that held up the deployment of NFS to Utah and Idaho. I call this the red zone because my rollout map utilizes green, yellow, red traffic semaphore colors. When the rollout stalled last year, all the world was green (using NFS) except Las Vegas, which was yellow (in transition) and Utah and Idaho districts, which were all red (not yet in transition).

I believe that IOUSs continue to be the limiting factor in the velocity of the rollout to the Red Zone. Lately, we’ve seen a variety of methods used to control the rollout speed.

Note: While I attempt to explain jargon specific to the Church of Jesus Christ of Latter-day Saints for you, my friends who are not members, the remainder of this article is unlikely to be of any interest outside Church members.

As in the Timpanogos district today, when a temple converts to NFS prior to the temple’s patrons, the method for making ordinance requests changes. Instead of taking a TempleReady disk to the temple, patrons take a Family Ordinance Request (FOR).

To assist patrons in the preparation of FORs, family history consultants at family history centers (FHCs) and in local wards have been given NFS accounts and a special feature called “Sign in to Help Someone Else.” In “NFS’s Helper Feature” I discussed misinformation going around stating that consultants shouldn’t use the Helper Feature. Some of this information comes from official sources, such as KB 105521 which currently states, “Signing on as a helper in the new FamilySearch when someone is not registered can be risky.” Another, KB 100546, can be misinterpreted if not read carefully. While support missionaries are instructed not to make changes for users when using Helper, family history consultants can and should.

IOSs to the Rescue

In the Timpanogos district today, and in other districts utilizing this split mode—temple on NFS, patrons not—patrons will follow this process to request temple ordinances for ancestors: 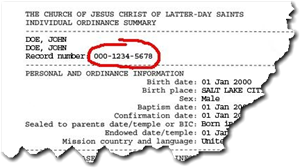 Your membership record number is located near
the top of your Individual Ordinance Summary.
Image Credit: © 2009 IRI, All rights reserved.