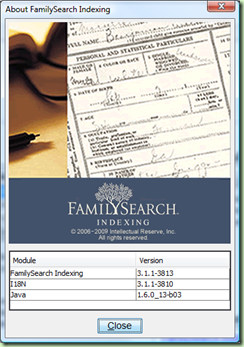 Tuesday, 26 May 2009, FamilySearch announced that new features were coming to FamilySearch Indexing. Friday, they announced a delay in the downtime previously scheduled for 1 June 2009.

Passwords. You can choose a password that doesn’t include a symbol. However, passwords still require at least one numeral.

Project Preferences. You can select preferences for the indexing projects you wish to index:

Prior to sharing a batch, you should save your work. Then click on File and Share Batch. FamilySearch Indexing will display a message reading

Contact the person you want to share this batch with and give him or her the following number: XXXXX.

Give this number to the person you want to help you. That person views your batch by taking the following steps:

Image Type. Image Type will be the first field in every batch. You will select the description of each image (such as Normal, Blank, or Duplicate) from the list provided.

New Icons. The icons used to mark a field or record unreadable will have a blue question mark on them instead of a red slash. 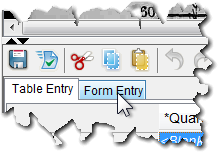 Header Data Tab. A new tab in the data entry area will enable indexers to enter information that applies to an entire document just once. Not all batches will include this tab, but if it is included, it will open first when you download a batch. I believe this is a feature available in Ancestry.com’s World Archives Project.

Mid-batch Quality Check. Click the Quality Checker tab before getting to the last field of the last record and you can see and correct all errors up to that point. You won’t be warned, however, about empty required fields until you do the final quality check.

Fields Marked for Review. To mark fields for review, you can choose to display either the red wavy line as in the past, or the colored background. (Is that what the Ancestry.com World Archives Project uses?) You can also change the color and transparency.

You can read more in the Help article, “FamilySearch Indexing: What’s new in indexing for release 1.7.” 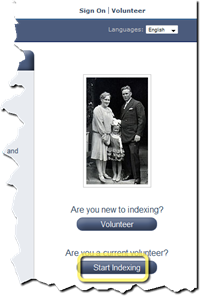 Click the Start Indexing button on the
FamilySearch Indexing web page if you
have problems after the upgrade.