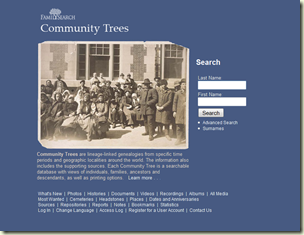 I have done a lot with Beta, Pilot, nFS, Forums and Wiki. This Community Trees thing has generally puzzled me. I wish there were more blog posts and analysis of it online. I teach about family history, but I have avoided teaching about this because it seems too complex. For example, will it become part of the new version of FamilySearch.org? How? Will it be searchable under the Trees option on the homepage? That would make sense.

I can understand the usefulness of keeping source based trees separate from each other and from nFS because where the connections end and begin can signify that group as families coming from a specific record set. If I understand it correctly, the purpose is to provide an easier method of research, skipping the historical record stage for us because you are doing that part and documenting it. It is a lot like Extraction which was put into the IGI, but the sources are cited better and the people are more connected within sources right?

Please share everything you can about the project. I'd love to see a new blog post letting us know it is not dead. I have not seen one since November 2009.

The Community Family Trees project is alive and kicking. FamilySearch’s Raymond Madsen made a presentation about it just last week at the FGS conference. Collection updates on the Community Trees website further indicate the living nature of the project. In this month alone there have been three new and two updated collections. (See more updates below.)

As to when, how, or even if, Community Trees will be added to beta.familysearch.org, I don’t have an answer. Madsen mentioned the project currently uses third-party software for the website. Judging from the beta website’s inadequate handling of Ancestral File trees, I think it may be some time before the beta site will be able to host Community Trees.

It is funny that you should mention extraction and the IGI. Earlier this month I suggested to FamilySearch management that for many members of the Church of Jesus Christ of Latter-day Saints, family reconstitution would be an excellent successor. Most wish to be connected to their ancestors, but few possess the skills necessary to accurately match multiple mentions of ancestors across multiple records. I’m convinced that by the middle of the century, family reconstitution will be standard practice at FamilySearch.

Africa and Orient: Knowles Collection: Jews of Africa and the Orient. NEW 28 June 2010