With the public slowly getting access to the New FamilySearch Tree, it bears repeating lessons learned.

When I first got access, I went in and started cleaning up the riff raff. The more ancestry you have in the Church of Jesus Christ of Latter-day Saints, the more garbage you will find. For five generations Mormon genealogies were hand copied (or typed) with mistakes (and typos) from parent to child among an ever widening fan of cousins. Reconciling the many different versions is herculean, but to guarantee it would be done wrong, FamilySearch produced the Ancestral File using error-prone machine combinations of patron submissions. Then they provided GEDCOM download and PAF’s hideous merge feature. Lest all this hard-earned garbage die too quickly, FamilySearch preloaded it into the tree and dared participants to clean it up.

That brings me back to my first session in the tree. I only meant to poke around and see what was there. But the errors were obvious (and legion). The temptation was too strong. I started correcting. Just small stuff at first. Several hours passed without notice and I realized I had corrected dozens of errors by sight—without consulting my sources.

Lesson learned? Don’t do that!

FamilySearch Chief Genealogical Officer, David Rencher, suffered the raw end of someone making such a change. The tree says his father’s name is Joy Thomas Rencher even though his grandfather’s name is correctly shown as Thomas Jay Rencher. 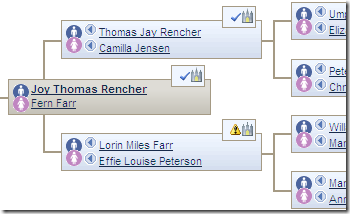 Some kind soul “fixed” this, changing the son’s name to match his father’s. Like me in my first foray into the new FamilySearch Tree, the person made changes without specifying a source. Had they consulted sources, they would have found Joy’s death certificate:

David Rencher confirmed that his father’s name was Joy. He said that Joy is a common male given name among the Danes in the White Mountain area of Northern Arizona in Mormon Settlements. He knows of six men named Joy in that region.

Yes, records say the darnedest things. But they should be consulted prior to making changes in the New FamilySearch Tree.