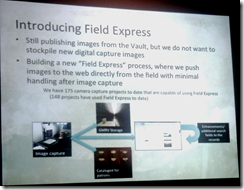 In a briefing for bloggers, FamilySearch’s Jake Gehring explained “Field Express.” Field Express is a new process they have developed to get records quickly onto the Internet. In the past, it took a considerable amount of time for records to make it from a microfilm camera inside a record archive and onto the Internet. Today, Field Express can do it in four weeks. The goal is to shorten that to two.

Gehring said that Field Express aims to “push images to the web directly from the field with minimal handling after image capture.” FamilySearch’s worldwide camera operations produce many more images than volunteer indexers can keep up with. Rather than allow the buildup of a backlog of unindexed images, Field Express utilizes metadata (basic information about the data, such as volume numbers) gathered in the field. The metadata is used to produce a rudimentary browse structure that gives access to groups of the images. While the resulting records are not nearly as assessable as indexed records, FamilySearch feels that motivated researchers would rather have images without indexes than no images at all.

In 2010 FamilySearch published over 1 million images from field express. So far in 2011, they have published almost 10 and their goal is to publish 21 million by the end of the year. They’re setting their sights on almost doubling that for 2012.

Gehring showed a map illustrating just how extensive FamilySearch’s camera projects are worldwide. (We were told we could get a copy of this today or tomorrow. I’ll share a legible copy at that time.) 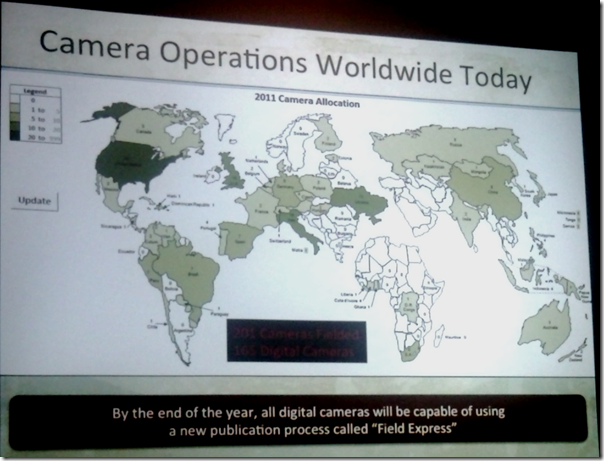 I’d have liked to write up Gehring’s presentation more completely. Consider this my own version of Field Express.