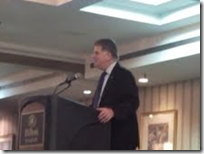 David Ferriero addresses the FGS Conference
“I have personally experienced the excitement of your work,” said David S. Ferriero in his keynote address this week at the 2011 annual conference of the Federation of Genealogical Societies in Springfield, Illinois.

Many years ago, his Grandmother Toomey gave him the Toomey family Bible. The information was fascinating. He was pulled in. It was this Bible he used when he was sworn in as the tenth Archivist of the United States.

The National Archives serve an important role. “The work we do every day is rooted in the belief that citizens have the right to see, examine, and learn from the records of their government,” said Ferriero. “They also have the right to learn about their families and those that came before them.”

“When FGS was founded [35 years ago], researchers spent long hours looking at page after page and taking hand-written notes,” said Ferriero. “Now, researchers come armed with scanners, digital cameras, and other electronic devices to copy traditional paper records, and we have installed WiFi in our Washington and College Park buildings to help them do their work. Many of the documents researchers need today are available on the Internet.”

When Ferriero started researching his paternal line he dug through NARA immigration files, unable to find their passage through Ellis Island. When he switched to online records, he quickly found his ancestors came through Boston, not New York!

Ferriero thanked FGS for being a great partner and for their money raising efforts to digitize the 1812 pension application case files. He said it consisted of 7.2 million pages in 180,000 case files. (Just prior to Ferriero’s address, Curt Wicher gave a progress report on the project from http://go.fold3.com/1812pensions: 72,000 images completed. FGS is raising the the $3.7 million dollars to make these images available online for free.) Images are already coming online on the NARA website.

(I’m ‘bout out of time, so pretend I adequately reported what he said about other aspects of the National Archives: the genealogy portal on archives.gov, 11 blogs, Facebook pages, Family Tree Friday blog posts, Wikipedia [where a photograph that gets 1,000 views on the NARA website gets 12,000,000 on Wikipedia], GLAM, OPA, ERA, and the 1940 census. I guess it isn’t just FamilySearch harping on the 1940 census.)

Flush from the excitement of discovering the Boston—not New York—immigration of his family, Ferriero wanted to share the discovery with someone. His uncle was still alive and living in Florida, so he called him.

“He could not have cared less,” said Ferriero. The audience howled with laughter. Yup; he was one of us.