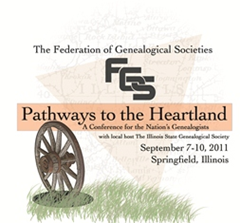 The 2011 annual conference of the Federation of Genealogical Societies gets underway in Springfield, Illinois today and I’m already behind. FamilySearch met with bloggers yesterday evening and in the course of a few minutes made several significant announcements.

Jake Gehring explained a process that FamilySearch internally calls “Field Express.” Through this process, images of records photographed in the field will be published online within two weeks. I thought this was the most significant announcement of the evening. I’ll write more extensively about it in a separate article.

Jim Erickson spent several minutes “not [making] a big announcement” about a 1940 census initiative. He told us to look for an announcement in the future. He did say that genealogical societies (this is the FGS conference, after all) could make a significant contribution to indexing it quickly.

Gehring announced the release of a beta test of the FamilySearch historical book collection. A project has been underway for 18 months to move the BYU Family History Archive to FamilySearch.org. A limited number of books is being tested on FamilySearch Labs at http://books.familysearch.org. Once released, all books will be added, including some not available on the BYU host.

While I was out at Labs, I noticed another beta project: Submit Your Tree. How long has that been out there? According to the website, “Submit Your Tree is an easy way to upload a GEDCOM file and compare it to millions of records that are already in new.familysearch.org.” I’ll take another look at this when I get the time.

But I digress. This was not an FGS announcement.

What was an FGS announcement was David Rencher’s comments about FamilySearch Civil War resources available at FamilySearch.org/Civilwar . (That’s the poorly designed page I mentioned during the NGS Conference. The design still stinks. But I digress…) Rencher pointed to new additions made since NGS: Civil War Pension Index Cards, Headstones of Union Veterans (Rencher said we’re in Yankee country, or he would have insisted on Confederate headstones), Provost Marshall Files, and Widows Claims.

New collections for the conference include:

Stay tuned so you can see me get further and further behind.