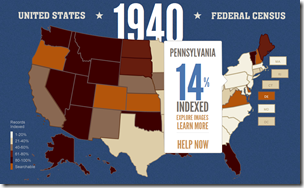 Images for the 1940 census were digitized from microfilm, according to Miriam Kleiman, public affairs specialist for the US National Archives. “There were many images on the microfilm that were filmed out of focus,” she said. The filming was done in the 1940s or early 1950s.

“After the microfilming was completed,” said Kleiman, “the original documents were destroyed.”

Kleiman pointed out that it was the Bureau of the Census that did the filming and destroyed the records. (Don’t flame the National Archives.)

Last week I reported that MyHeritage had published the index for New York, putting them at 10.51% indexed. An alert reader reported that “it appears that only Albany and Allegany counties are fully indexed and a few other counties are partially indexed.” A source inside MyHeritage confirmed that New York was not complete. (In the future I’ll have to assume that posted states are not complete.)

Applying that correction, the race status for completed, published states is shown here. There have been no changes since FamilySearch released a bunch of states for the NGS conference.

Florida has bounced back to 100%. Hawaii, Louisiana, Mississippi, and Montana have hit 100%.

Also at 100% but not published are: Alaska, Arizona, Idaho, Nevada, Utah, Vermont, and Wyoming.

Could it be that FamilySearch is not able to keep up with its own indexers? Is this list fated to grow throughout the project?