Inside View of FamilySearch Indexing the 1940 Census

Thomas McGill gave an insider’s view of FamilySearch indexing in a presentation to the Utah Genealogical Association (UGA) on 19 April 2012. The presentation was hosted by UGA president, Janet Hovorka (“the Chart Chick”). 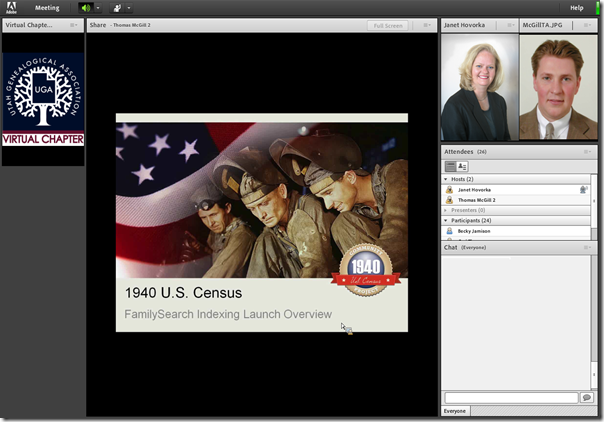 McGill shared internal information about FamilySearch’s indexing work. Prior to the release of the 1940 census, FamilySearch set a number of goals.

FamilySearch planned to have one or more indexing projects available by 6pm on 2 April 2012, the day they received the images. They exceeded this goal with five states live by 4pm. They had all states live by Friday, 13 April.

FamilySearch hoped to have all images published by 17 April and beat the goal by five days.

McGill said that FamilySearch has a concern. 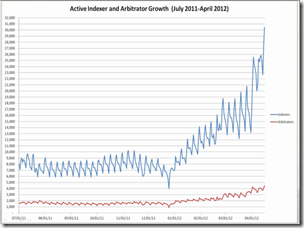 He showed the graph to the right. It shows the number of active indexers (in blue) and arbitrators (in red) since July 2011.

He explained the saw tooth as a weekly pattern that peaks each week from 6pm Sunday evening to 6pm Monday evening.

He said the big dip was Christmas day and pointed out that since then FamilySearch has had even, healthy growth in the number of indexers. That growth accelerated with the release of the 1940 census.

The same is not true for the growth of arbitrators as shown by the red line. “We are beginning to fall behind on arbitration,” he said and noted that there are lots of experienced indexers who could be good arbitrators.

Arbitration is necessary because FamilySearch uses dual keying. Each batch of records is sent to two indexers. If the two indexers specify different information, as might happen with a hard to read name, then the batch is sent to a third person, an arbitrator, to examine the discrepancy and choose a value.

In closing, McGill urged attendees to consider becoming arbitrators. To become an arbitrator, contact your group administrator (or your stake indexing director if you are a member of the Church of Jesus Christ of Latter-day Saints) and ask to be given arbitration rights. To see the name and contact information of the person you need to contact, run the FamilySearch Indexing application, click on Help, and then click on Local Support.