Ancestry.com Q & A at NGS Conference 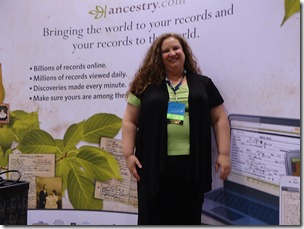 Cowan said that people don’t always understand that Ancestry.com and FamilySearch’s indexing efforts are separate. Ancestry has their own effort. They are using several commercial keying vendors to index the census. Ancestry will publish each state as it is completed, but they don’t know what the order will be. Cowan told me that they have assigned a particular order for each vendor, but they don’t know in which order the vendors will finish the state they are working on.

They also don’t know when the entire effort will be completed, but they are committed to having it done by the end of the year.

Attendees suggested they publish each county as it is complete. Cowen explained that doing so would make the entire effort take longer. There is a certain amount of work that must be done regardless of how much is published. Incurring that work 50 times is not nearly as expensive as 3000 times.

There were several questions about Ancestry’s new DNA offering.

Attendees were interested to learn that the new autosomal tests are not gender specific. The old Y chromosome test targeted the father-to-son male chromosome. Consequently, the test worked only on men and only showed ancestry along one line (typically the “top line”) of a pedigree. The old mitochondrial test also worked on only one pedigree line (typically the “bottom line”). Autosomal testing can show ethnicity for all pedigree lines.

The $99 price is a discount available only to Ancestry members. Cowan didn’t know if the price would continue long-term. Ancestry is also “throttling” participation so they are not overwhelmed.

Coming to Cincinnati, Cowan performed the same operation on her tree that I did on mine. (See “Family Tree Maker 2012.”) She searched for Cincinnati and found out she had ancestors who lived here for several years. Using the information, she was able to do some research while she was here.

People also had lots of questions about synchronizing online and offline trees. Attendees didn’t all understand the concept of having one tree on the desktop and one tree in the cloud.