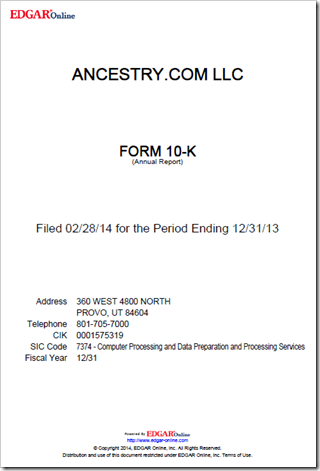 Ancestry.com recently filed a form with the government that contained some interesting information.

Ancestry.com has 2.1 million subscribers on the Ancestry.com website as of the end of last year. That goes up by only 600,000 when including their other websites: Archives.com, Fold3.com and Newspapers.com. (Have you ever felt like they ignore Genealogy.com?)

They had over 12 billion records at the end of the year. (I went through their card catalog and could only account for 10 billion, but, hey, what’s 2 billion among friends.) That’s an increase of 1.2 billion records during last year.

About 65% of their subscribers have subscriptions of six months or longer.

Ancestry.com identified what they felt were their key business highlights for the year:

You can read the entire, rather boring, report online.