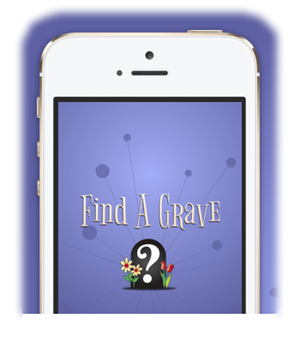 “As promised, we have recently released the first version of the Find A Grave mobile app," said Mike Lawless of Ancestry.com’s Find A Grave app team. “With the app, you’ll be able to bring the most important aspects of Find A Grave with you.” The new app can:

I don’t know if the Find A Grave people had an app in development when Ancestry.com purchased them. I’m guessing they did not. This would then be the first big value the public has enjoyed because of the purchase. Along with the app, users get access to Ancestry.com’s large, full-time support organization. The app, like Find A Grave itself, remains free.

“This release is just the beginning and we have a road map of features for our users which will keep the Find A Grave mobile app improving over time,” said Lawless.

I was not able to install the app on my iPhone because it requires 7.0 or later and my phone’s stuck on 6.1. An Android app is in the works, but Ancestry.com hasn’t yet announced a date. The current Find Grave Android app was not official and I’m not certain if it is still available. I would assume Ancestry.com would ask them to remove it.

Tombfinder from SaasSoft is a similar app, but is approaching the market differently. Thy have partnered with 230 cemeteries to provide visitors a finding aid to cemetery plots in those cemeteries. NMCP Finder provides the same service, but is dedicated to the National Memorial Cemetery of the Pacific (the Punchbowl Cemetery). Beloved by Eilon Fulman allows users to mark the GPS location of gravesites, but doesn’t support photos.

The Find A Grave app can be downloaded from the iTunes app store.