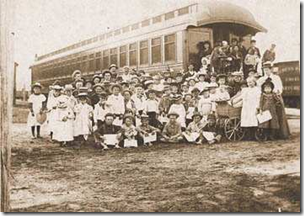 Over a quarter million orphans and unwanted children from the streets of New York were loaded up on trains and sent out all over the country to be given away. That’s right; you heard what I said. Stop after stop, perspective adopters inspected their teeth and squeezed their muscles to see how well they could work the fields.

This chapter in American history is largely untold and largely unknown.

The “Riders on the Orphan Train” FGS Conference keynote was created and presented by Phil Lancaster and Alison Moore to tell their stories. Lancaster is a singer-songwriter and Moore is an author and humanities scholar. To tell the stories, the two sang and played guitars while we viewed historical photographs and interviews of two survivors. Alison painted a word picture allowing us to see into the minds of the fearful children. 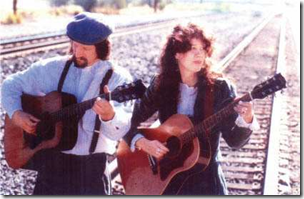 Phil and Alison are the official outreach coordinators for the National Orphan Train Complex Museum and Research Center in Concordia, Kansas.You can read more about the presentation on their website.

And it’s not too late for you to join us for the weekend.

See you in San Antonio!