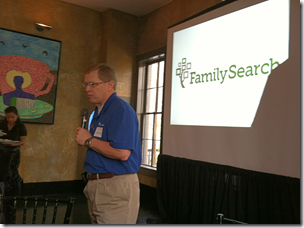 David Rencher addressed bloggers at the
FamilySearch Media Dinner at FGS 2014.
(Thank you, Marian, for taking the picture for me. I
neglected to ask you if you wanted to be credited.)

Dan Call gave us very little of his Shrek imitation.
Mostly he just talked about RootsTech 2015.
The 2014 annual conference of the Federation of Genealogical Societies kicked off, for me at least, with the usual FamilySearch media dinner. FamilySearch hosted 30 to 40 bloggers at the Rio Rio restaurant off the river walk in San Antonio, Texas. We ate Mexican food and talked FamilySearch. If I had to pick a theme, I’d say it was that FamilySearch Family Tree is growing and improving. We learned about mobile apps that bring The Tree to your pocket. We learned about tree views and three icons. And we learned about attaching hints (suggested records) to The Tree.

Bloggers wear multiple hats and many of those assembled are also society officers, speakers, and other community influencers. David Rencher, FamilySearch chief genealogical officer, thanked those assembled for all they do. “My hats off to you.” He told us that he monitors the quality of the information in the tree and it is increasing. One indicator he looks at is counting the number of people in the tree with too many parents. While it’s common and correct to have several sets of parents, once you get a dozen or more, you’ve got too many. That indicates a problem with the quality of the information in the tree. Rencher was happy to point out that he is seeing improvement.

Dan Call, fresh from a stint of playing Shrek onstage, next gave us a short plug for RootsTech 2015. (We thought they were teasing about him playing Shrek, but the Internet verifies he did. And the Internet doesn’t lie!) RootsTech (“I thought it was a bionic plant”) 2015 is coming on 12-14 February 2015. The theme is “Celebrating Families Across Generations.” 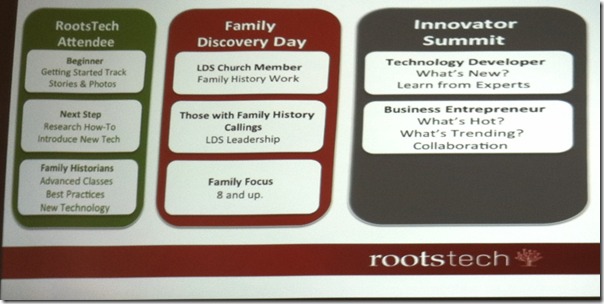 (Sorry about the distortion of Call’s slide. I was sitting too close to the bottom right corner of the screen.)

Call also casually mentioned that some other conference—which one is it?—was going to be held side-by-side with RootsTech 2015. Wait. Wait. Oh, yes. FGS. Hello, Dan!

Registration opens 29 August for RootsTech 2015 and a $139 early-bird special price will be available for two weeks. The new RootsTech.org website is now live. Check it out!

(I’m running out of time to write, so I’m going to have to wrap up the last three presenters rather quickly.)

Bryce Roper, a FamilySearch Family Tree product manager, told us about the two FamilySearch mobile apps: Family Tree and Memories. “We’ve been behind the wave and we’re trying to get on top of that wave as quick as we can,” he said. The apps and the FamilySearch.org website are tied together. The information viewed or contributed on one is available on the other. The exception today is that audio recordings captured by the apps is not available online. “Hopefully, before the end of FGS we’ll have it released for the web as well,” Roper said. “It is really, really close.” The web feature will additionally be able to add existing audio files.

The Memories app is available for Apple and allows you to

The roadmap for Family Tree includes the ability to add persons to The Tree, and edit or change facts about them.

Mark Gowans mentioned that the three tree icons that we see in the descendancy view will soon be in the traditional pedigree and portrait pedigree views: 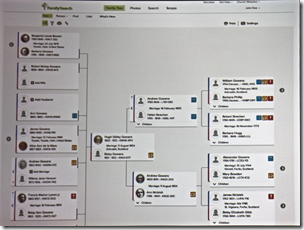 The three icons are:

High contrast versions of the tree views will be available for those with visual challenges: 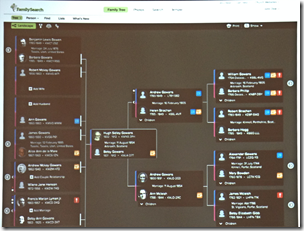 (It’s time to put both this article and this author to bed, so let me wrap up quickly.)

Gowan and the final presenter, FamilySearch product manager for Search, Robert Kehrer, both addressed hints. Hints are suggestions that FamilySearch gives concerning historical records that might apply to people in Family Tree. FamilySearch considers all the facts about a person in the tree and all of his “one hop” relatives: spouse, parents, and children. (I don’t recall if siblings were included.) It compares all these facts to persons in records to decide if there is a match. Kehrer believes that their hinting system is more than 98% accurate. He thinks that further improvement is possible; he believes they can increase the number of hints made without decreasing the accuracy. (That is to say, he can decrease the number of false negatives without increasing the number of false positives.)

Kehrer demonstrated how to take a hint and attach all the people mentioned in a record to all the corresponding people in the tree. The demonstration was followed by an awesome set of questions from attendees about user behavior and whether or not the idea of a single, shared tree will work. In the end, the group decided…