Records are the darnedest things! 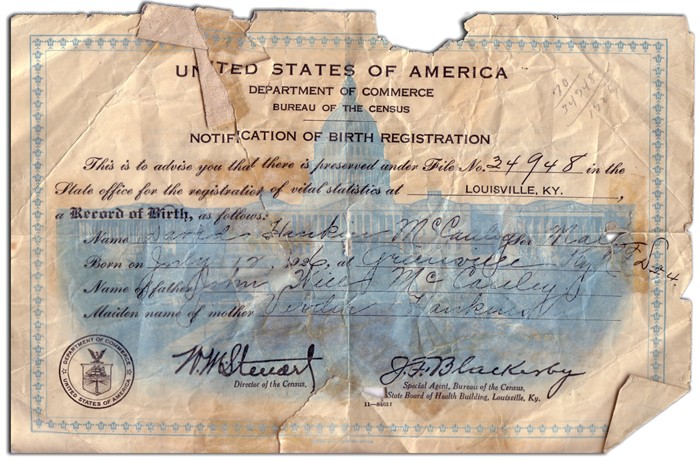 Some time ago I came across an interesting blog post by Linda McCauley: “Did the U. S. Federal Government Register Births?” Linda has in her possession an official certificate from the Bureau of the Census (shown above) that documents the birth of her father. It gives his name, the date and place of birth, and it names his parents. It is signed by official authorities.

How do you feel about using this source as evidence for this birth?

With a little poking, Linda learned about notifications of birth registration. According to the Census Bureau:

The “Notification of Birth Registration” form, issued by the U.S. Census Bureau during the first half of the twentieth century, is not a birth certificate. The U.S. Census Bureau designed this form in 1924, at the request of various state vital statistics offices, to promote the accurate registration of births in the United States. The notification was completed and sent to parents of newborns when the state office of vital records received information on the birth and made up a birth registration record. If parents found errors in the information shown on the form, they were asked to correct them and return the form so the state’s record could be corrected accordingly. The notification was used until the late 1940s and then discontinued once states were keeping satisfactory birth records. The U.S. Census Bureau does not maintain these records.1

Now, how do you feel about using this source as evidence?

Now, how would you feel about using this source as evidence? How would you compare the strength of these two sources? Are the two independent? Is there any advantage to having both? What can be learned by comparing the two?

Yes, records are the darnedest things!

Thank you, Linda, for your permission to share your record.